Prescription drug costs are on the rise, and it’s no secret that in the United States, we feel this crunch more than anywhere else in the world. When I was diagnosed with potentially deadly blood cancer, I got the drug I needed at an affordable price—thousands of dollars less than I was told I would have to spend. What questions should you ask your doctor to start lowering your prescription drug bill? Start with these two, and learn more in Your Best Health Care Now: Get Doctor Discounts, Save With Better Health Insurance, Find Affordable Prescriptions.

Why are you prescribing this specific medicine? Your doctor should be able to fully describe the benefits you’ll get and when you should expect to experience them. For example, women with common urinary tract infections should feel better after a few days on the antibiotic nitrofurantoin. If not, at the least, they should stop wasting money and consult with their doctors about what to do next.

The stakes get higher with chronic conditions. When my doctors said I should switch from Revlimid, which was no longer controlling my blood cancer after five years, to the new and more powerful Pomalyst, they said they would be able to measure whether my blood tumors decreased within the first month of treatment. I’m happy to say that’s exactly what happened; otherwise my doctors and I would have been scrambling for options as my tumors continued to multiply.

No matter how serious your condition is, pin down your doctor to a target date of when you should be getting better. If you don’t get the benefits by then, don’t wait. Get back to your doctor and ask if you’re wasting money—and risking your health—on the wrong medicine.

Why are you Suggesting this specific dosage? Generally, you want to take the least amount of medicine that works. There’s an obvious financial angle as well. Sometimes, slightly different dosages of the same medicine can cost hundreds of dollars more, as it did with metformin, a drug to control blood sugar. GoodRx, which tracks the prices of more than six thousand FDA-approved drugs at seventy thousand pharmacies, reported in 2015 that a Kmart wanted $800 cash for a different dosage of the drug available at Walmart for $4. Presumably with some help from their doctors, nearly all of the people paying $800 could find a safe way to control their diabetes with the $4 version—to say nothing about what savings like that would do to improve their blood pressure.

Also, be especially attentive if you are seeing a so‑called dispensing physician; that is, a doctor who gives you the drug directly and either bills you or your insurer rather than writing a prescription that is filled by a pharmacist. Studies in 2015 in several states, including California, Ohio, and Illinois, indicate that some dispensing doctors were charging much higher prices for unusual dosages of common drugs such as generic Vicodin, a combination of the pain medication acetaminophen and hydrocodone, as well as the opioid painkiller tramadol and the muscle relaxant cyclobenzaprine. 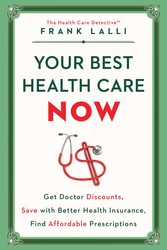 Inspired by his viral New York Times article, prize-winning investigative journalist Frank Lalli details how he mastered the ins and outs of health care—and how you, too, can get the best care for your money.Frank Lalli, the former editor of Money and George magazines, has devoted his career to getting to the bottom of a good story. When he was diagnosed with Multiple Myeloma, a rare but potentially deadly blood cancer, he put his reporter’s instincts to work and got the wonder drug he needed at an affordable price—thousands of dollars less than he was told he would have to spend. Amazed by the complex and arbitrary nature of the health care system, he decided to share what he has learned as his own Health Care Detective so that others can find their best care and save money, too. Based on three years of research and more than 300 first-hand interviews with experts, Your Best Health Care Now is your easy-to-follow, real-world guide to making today’s health system work for you. You’ll learn all the smart moves and timely tips to get better care and save hundreds, if not thousands, of dollars—no matter what your concerns may be. Whether you’re trying to book a free check-up or negotiate with a surgeon, looking for an effective generic drug or the best price for a brand-name, or worrying about high insurance deductibles and rising premiums or a stack of surprise bills, Your Best Health Care Now has the answers you need to take charge of your wellbeing.