Many common static stretches could actually be detrimental. If you want to stretch before exercising, try these dynamic movements from FastExercise instead.

It’s widely believed that static stretching—the kind that involves holding a movement, such as bending over and touching your toes—makes your muscles more flexible, primes them for activity, and reduces the chance of injury. That belief, widespread though it is, doesn’t seem to be based on hard evidence. Indeed, the kind of stretches most of us think we should do before exercise—touching the toes or extending the hamstrings—have no obvious advantages and may be detrimental.

When Dr. Ian Shrier, of the Centre for Epidemiology at the Jewish General Hospital in Montreal, reviewed the evidence on pre-workout stretching for The Physician and Sports Medicine Journal several years ago, he found that stretching immediately before a gym session actually led to a reduction in muscle power. The effects were small and temporary, but significant enough for Shrier, a past president of the Canadian Academy of Sport and Exercise Medicine, to recommend dropping stretches from warm-ups. There is also the question of whether stretching reduces injuries. Most studies suggest it doesn’t. A review article in Sports Medicine makes the sensible point that if the sport you are doing involves a lot of stop-start (e.g., football) then you might get some benefit from stretching; but if you are running, jogging, or swimming, there is strong evidence that stretching has “no beneficial effect on injury prevention.”

If you want to stretch before you start, make it dynamic, with movements such as arm circling and side-stepping. Dynamic movements send a message from the brain to the muscles saying, “We are ready to work out.” Static stretching, by contrast, triggers an inhibitory response in the brain. For sports like football, dynamic stretching might mean a bit of ball kicking and dribbling. 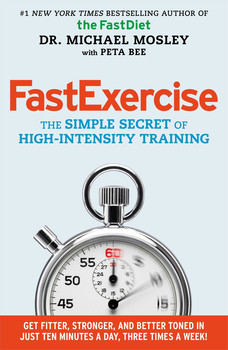 Responding to the latest research on high-intensity training (HIT), FastExercise dispenses with the practice of boring, time-consuming regimens, demonstrating that all it takes is half an hour a week to lower blood glucose levels, reduce your risk for disease, help you lose weight, and maximize your overall health.