It’s a common misperception that it’s too expensive to eat healthfully. But the truth is, it will save you tens of thousands of dollars in the long run, not to mention the priceless feeling of living with a healthy body and mind. Read more in 4 Minute Fit: The Metabolism Accelerator for the Time-Crunched, Deskbound, and Stressed Out.

Here are two riffs I overhear at work that make me stop what I’m doing and react:

In the first scenario—the person who thinks he’s getting a better economic deal for eating like crap—we see a person who’s making a terrible long-term investment. Study after study shows how costly it is to be obese, both for the individual and for society. And it doesn’t stop there. Obese people are less likely to be hired, less likely to be promoted, and less likely to get raises; plus, they incur hidden costs, like putting extra gas into their cars to accommodate their extra weight.

We’re talking about thousands—perhaps tens of thousands—of dollars a year taken from your paychecks and personal income just for being obese. That’s a lot of Value Meals! Let’s be clear: living an unhealthy life comes with a lot of hidden costs.

What’s more, eating healthy doesn’t necessarily mean eating $13 lunches at Whole Foods. One personal example: right now I am a single father with shared custody. I have a busy life, and I try to get the “busy” out of the way before my boys come to me on weekends. One way I try to maximize time is to do the meal preparation before they arrive— without losing and destroying the nutrients from the food. So several times a week, I’ll buy some celery, carrots, onions, and garlic at the local organic market, and a whole organic free-range chicken. (It costs a little more, but not dramatically more, and the nutritional payoff of local, organic food is worth it.) I’ll chop up the vegetables, dump everything into a Crock-Pot, throw in some seasonings, and slow-cook this.

Start to finish, it might take me twenty minutes to prepare, and then the slow cooker does the rest. We’re talking basic ingredients. (Other favorites of mine: beets, okra, spinach—nothing exotic—with some sort of meat.) It might cost $20, tops. And this will feed three of us for dinner and lunch the next day—with some left over. We’re talking six to eight healthy, organic meals from one food prep, for maybe $20. That’s no $13 salad! (In fact, it’s a lot less expensive than those “value meals” at the chicken joint.)

There are infinite combinations for eating healthy. There are also countless substitutions—for both your personal taste preferences and your finances. Don’t want to buy a whole organic chicken? Use fish, turkey, bison, or lean beef. Don’t want to eat pasta? Try spaghetti squash; it’s an inexpensive base that mimics pasta, without all the carbs. Spaghetti squash with tomato sauce and some chicken, shrimp, or bison sausage? That’s tasty and supremely nutritious. And it’s costing you much less than dinner at Chili’s or Applebee’s. 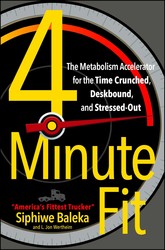 From Yale-educated truck driver and fitness guru Siphiwe Baleka, a revolutionary metabolism-spiking program for anyone who feels they don’t have enough time, equipment, or money to get in shape and lose those extra pounds. Combining step-by-step workouts and advice on healthy eating (even on the go), 4-Minute Fit is a flexible, yet powerful plan that is proven to boost your metabolism, provide results, and help you get rid of those extra pounds and reach your weight loss goals. Baleka’s program is geared not only for those who drive eighteen-wheelers, but also for anyone who travels for work, has a job that involves a lot of sitting, or doesn’t think they have enough time to exercise and eat better. If you’re frustrated by the weight gain that comes from not being active enough due to your job or lifestyle, 4-Minute Fit is the simple new guide that can radically change your life.