I don’t know about you, but in order to eat clean and working out regularly I need motivation and inspiration. Well, Major Taylor, the famous cyclist, will give you precisely that. Michael Kranish, author of THE WORLD’S FASTEST MAN, shares the athlete’s training regiment, which MIGHT inspire you to eat a salad or go to the gym today.

In addition to becoming one of the world’s most famous athletes as a black man in Jim Crow-era America, one of Major Taylor’s most remarkable achievements was transforming himself from a scrawny boy into a perfectly developed and muscular man who, at five feet seven inches and his ideal weight of 154 pounds, beat those who were stronger and taller.

He studied the methods of champions, learning from his mentor, Birdie Munger, and his hero, Arthur Zimmerman. He adopted an exercise and nutrition regimen that was unrivaled among his peers—and still holds lessons for those who dream of following Taylor’s path, or who wish simply to gain fitness.

He recommended abstaining from alcohol and tobacco, eating wisely, and working simultaneously on strength and conditioning.

Here is Taylor’s training regimen, gleaned from advice he wrote in the New York American, his autobiography, various articles, and photographs.

Could you keep up with Major?

Tips on Life & Love: How to Prepare for Your Daily Walk

Excerpted from The World’s Fastest Man by Michael Kranish. Copyright © 2019 by the author. Used by permission of the publisher. All rights reserved. 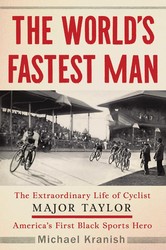 In the tradition of The Boys in the Boat and Seabiscuit, a fascinating portrait of a groundbreaking but forgotten figure—the remarkable Major Taylor, the black man who broke racial barriers by becoming the world’s fastest and most famous bicyclist at the height of the Jim Crow era.

In the 1890s, the nation’s promise of equality had failed spectacularly. While slavery had ended with the Civil War, the Jim Crow laws still separated blacks from whites, and the excesses of the Gilded Age created an elite upper class. Amidst this world arrived Major Taylor, a young black man who wanted to compete in the nation’s most popular and mostly white man’s sport, cycling. Birdie Munger, a white cyclist who once was the world’s fastest man, declared that he could help turn the young black athlete into a champion.

Twelve years before boxer Jack Johnson and fifty years before baseball player Jackie Robinson, Taylor faced racism at nearly every turn—especially by whites who feared he would disprove their stereotypes of blacks. In The World’s Fastest Man, years in the writing, investigative journalist Michael Kranish reveals new information about Major Taylor based on a rare interview with his daughter and other never-before-uncovered details from Taylor’s life. Kranish shows how Taylor indeed became a world champion, traveled the world, was the toast of Paris, and was one of the most chronicled black men of his day.