Norwich, a little town in Vermont, has managed to put 11 people on Olympic teams. This town prides itself on hands-off parenting and making sure children are enjoying themselves. NORWICH by New York Times reporter Karen Crouse, is full of stories from Olympians who were able to have a balanced and fulfilling childhood. Find out how the town did it below with an excerpt from the book’s Prologue and a video interview with Karen.

Norwich restored my flagging faith in Olympic sports. By 2014, as I muddled through the mess that was the Sochi Olympics, with its displaced citizenry, disappearing dogs, dilapidated accommodations, and distressing price tag, my emotional tether to the competition was fraying. It was my ninth trip to the Olympics—tenth if you count the 1984 Summer Games in Los Angeles, where I volunteered as a hostess—and it was hard not to feel as if I was witnessing a grande dame’s last, gasping breaths. The Sochi Olympics rolled up a record tab of $51 billion and required a large army of police to secure. Russia gave the world an Olympics characterized by human-rights violations and a systemic doping program by the host country. The Games were also marred by a handful of serious injuries to participants who were encouraged to take on ever-higher degrees of risk for the entertainment of the viewers.

Where were the Olympians who were in it for the joy? [Freestyle skier and Norwich athlete] Hannah Kearney’s remark about [there being something in] the well water wasn’t so far off. Norwich does have an old-fashioned tonic to cure what ails contemporary sports. Like their farmer forebears with their crops, the parents of Norwich learned through trial and error the best methods of nourishing happy athletes; by valuing participation and sportsmanship, and stressing fun, community, and self- improvement. [My book Norwich] is the story of how they did it.

Watch the games with a big cup of hot cocoa. 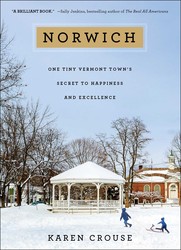 The extraordinary story of the small Vermont town that has likely produced more Olympians per capita than any other place in the country—and whose citizens provide a model for achieving excellence while leading a well-rounded life.Norwich, a charming Vermont town of roughly three thousand residents, has sent an athlete to almost every Winter Olympics for the past thirty years—and three times that athlete has returned with a medal. How does Norwich do it? To answer this question, New York Times reporter Karen Crouse moved to Vermont, immersing herself in the lives of Norwich Olympians past and present. There, amidst the organic farms and clapboard colonial buildings, she discovered a culture that’s the opposite of the hypercompetitive schoolyard of today’s tiger moms and eagle dads. In Norwich, kids aren’t cut from teams. They don’t specialize in a single sport, and they even root for their rivals. What’s more, their hands-off parents encourage them to simply enjoy themselves. Making it to the Olympics is seen not as the pinnacle of an athlete’s career but as a fun stop on the way to achieving other, longer-lasting dreams. Norwich, Crouse realized, wasn’t just raising better athletes than the rest of America; it was raising happier, healthier kids. Full of inspiring stories of Olympians who excelled on and off the sports field—and had a blast doing so—Norwich is the book for every parent who wants to raise kids to be levelheaded, fulfilled, and successful.