I wanted to play tennis competitively in my 50s, but I wasn’t sure if it was possible. In addition to the physical drawbacks, I wasn’t sure my brain could learn new skills—I knew cognitive decline was a reality I had to face at some point. It turns out that despite my age, arthritis, and flat feet, I had many years left to make it happen. I wrote all about it in Late to the Ball: Age. Learn. Fight. Love. Play Tennis. Win.

Some other things you know about your physical self as you enter your sixties: Your lung capacity is in steady decline, as are the fast-twitch muscle fibers that provide power and explosive speed. Your heart is perhaps only 70 percent as efficient as it was when you were thirty. Your prefrontal cortex—where the concentrating and deciding you do gets done—has been shrinking for forty years. Your sight has been diminishing, your other senses, too, and this, along with a gradually receding ability to integrate information you are absorbing and to then issue motor commands, means your balance is not what it used to be, especially under pressure and on the move—which is pretty much how tennis is played.

The good news—for me—was that there was good news, of a sort. Much remains unknown about how aging affects the neural basis of cognition, but what recent studies based on neuroimaging and other techniques have tended to find is that real cognitive slowing is something to start worrying about in your late sixties. I could still learn (maybe). Moreover, the learning itself was going to be good for my brain, force it to grow: I would, according to the neuroscientists, create new gray matter and synapses. And while empirical data is as yet pretty scarce, there is research that suggests that taking up a new pursuit late in life correlates with better sleep, better immune function, and lower levels of cortisol, the release of which rises in response to stress. The physical and cardiovascular demands of tennis were going to be good for my brain, too, and for the rest of my body. I might live five or six years longer—though there is some research that shows that really playing, playing hard, which was my goal, is less likely to lengthen life (because of the strain? The risk of injury?) than taking long walks.

But, really, how much could I learn, as I got serious about my tennis in my late fifties? Quite a lot, according to the neuroscientist Gary Marcus. Marcus challenges the neuroscientific consensus that to truly know anything, from a language to a sport, you had to begin as a child. Brain researchers refer to this as the “critical-period effect,” and their evidence is based in large part on a study of young barn owls that could—as older barn owls could not—rather easily adapt to what amounted to a virtual-reality experiment in which a prism distorted their perception of things. But then a Stanford neuroscientist, Brian Knutson, found that old owls actually could adapt during this experiment, if you slowed it down and broke up their reorientation to a new environment into smaller parts. Marcus was so buoyed by Knutson’s findings that he did an experiment on himself: He learned to play the guitar and wrote an entertaining book about it, Guitar Zero. He was forty, not in late middle age, and guitar playing, even, say, in a death-metal band, is not as taxing as tennis playing. Still, I was buoyed by the approach to late learning Marcus posited: Proceed with patience and good humor, tackle the new thing you’re doing bit by bit, keep expectations low and persistence high. 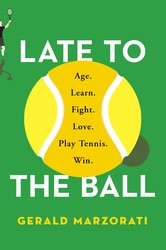 Late to the Ball
by Gerald Marzorati

An award-winning author shares the inspiring and entertaining account of his pursuit to become a nationally competitive tennis player—at the age of sixty. Being a man or a woman in your early sixties is different than it was a generation or two ago, at least for the more fortunate of us. We aren’t old…yet. But we sense it coming: Careers are winding down, kids are gone, parents are dying (friends, too), and our bodies are no longer youthful or even middle-aged. Learning to play tennis in your fifties is no small feat, but becoming a serious, competitive tennis player at the age of sixty is a whole other matter. It requires training the body to defy age, and to methodically build one’s game—the strokework, footwork, strategy, and mental toughness. Gerry Mazorati started playing the game seriously in his mid-fifties. He had the strong desire to lead an examined physical life, to push his body into the “encore” of middle age. In Late to the Ball Mazorati writes vividly about the difficulties, frustrations, and the triumphs of his becoming a seriously good tennis player. He takes on his quest with complete vigor and absolute determination to see it through, providing a rich, vicarious experience involving the science of aging, his existential battle with time, and the beautiful, mysterious game of tennis. Late to the Ball is also captivating evidence that the rest of the Baby Boomer generation, now between middle age and old age, can find their own quest and do the same.