Full and half marathons have been gaining in popularity, and not just because of the health benefits of running. Where else do thousands of people—elite athletes and beginners—come together to challenge themselves both physically and mentally? From The Chi Marathon: The Breakthrough Natural Running Program for a Pain-Free Half Marathon and Marathon by Danny Dreyer and Katherine Dreyer.

Like an art museum or a symphony, a marathon is a great place to go when you want to feel good about the potential of the human race. Whether you cheer a friend on from the sidelines, volunteer at an aid station, or run the event yourself, you get to witness and experience a side of humankind that is both elemental and exalted. I love being at marathon events because of the singular connection of spirit that bonds everyone. It’s manifested as the innate drive to evolve, to better oneself—to be that bridge between heaven and earth, between the invisible and visible worlds, between mind and body.

You don’t need to have expensive or special equipment. Heck, the more low-tech the shoe, the better, these days. The best runners in the world are those who’ve run barefoot most of their lives. You don’t need to be part of an elite club—and yet there are plenty of clubs and groups you can join to enjoy the camaraderie. Going out for a run is one of the quickest and least complicated ways of getting fit.

Along with the elemental beauty of running is the individual story of each runner; every one as inspiring as the next. For some, it is their first marathon. Perhaps they had been significantly overweight or never felt particularly good about their physical abilities; but they decided they too could run and reclaim their health. They have trained for months and are putting themselves at that start line to join in with the thousands of others who also at some point were in their first marathon. Some find that running helps them manage their depression or addictions and celebrate their internal victory by joining the unifying spirit of the marathon. You might find someone running his tenth marathon in as many months and this one being the one hundredth in his life. Story after story is filled with the wonder of the potential of the human spirit to overcome difficulty and sometimes conquer impossible odds. Marathon events are brimming with the excitement of athletes of every level and concern, collectively reaching beyond themselves.

In the lead pack, you’ll see human beings who have spent a good deal of their lives dedicated to perfecting their sport, putting everything they have into that event. No matter where you are—cheering from the sidelines, watching from a television screen thousands of miles away, or running in the back of the pack — you can feel the energy of their effort lifting us all up and sparking our imaginations. What can’t the human body do? Better yet, what can this body do?

In 2009 almost half a million U.S. runners ran a marathon, and more than 600,000 ran a half marathon. The number of female finishers now outpaces the number of men who finish. Not only are the participation numbers in marathons increasing each year, but so is the number of marathons. In 2009 more than twenty-five new marathons were introduced in the United States alone—and this during a downturn in the economy.

There is no comparison to the palpable energy of a marathon event. Where else do thousands of people come together in such a large mass and challenge themselves physically and mentally to such a degree? How often do elite athletes and everyday people get to participate in the same event? These events have made long-distance running accessible to anyone willing to stretch herself beyond her perceived limits.

Considering the many health benefits of running, the annual increase in half and full marathon events means that more and more people are getting fit, improving their cardiovascular and aerobic health, releasing excess weight, and feeling mentally more clear and focused. Distance running offers all of those benefits and so many more. Inside every endurance athlete is the desire not only to do something that is beyond the normal but also to step beyond what he has accomplished before, whether it’s his first half marathon or his sixtieth marathon by age sixty. Humans live to evolve, and we run with the desire to expand ourselves, to see what’s possible and to feel ourselves stretching our limits. 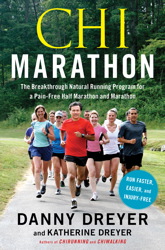 The Chi Marathon: The Breakthrough Natural Running Program for a Pain-Free Half Marathon and Marathon
by Danny Dreyer

This is the book that distance runners have been waiting for. With Chi Marathon you can enjoy the run and feel confident no matter the distance.