As a child, I was enamored with my own beauty. I’m compelled to describe myself in an early diary entry, doing so as follows, “I have long, wavy, golden hair and big, beautiful blue eyes.” My faith in my wonderful good looks was palatable, and I took delight in dressing in bright, showy colors, unafraid to stand out, peacock-like, from the crowd. Which is why it was so odd to find myself in my late 20s/early 30s convinced of my own Quasimodo-esque ugliness.

The mirror was a horrorshow, reflecting back nothing golden or beautiful. Instead, I saw thin lips, a witches’ chin and dark circles on par with two black eyes. Despite having a boisterous group of friends, promising career, and exciting life in New York, love eluded me, and the reason (I was sure) was my own physical failings.

On meeting my partner, these feelings began to fade. Her daily affirmations that I was delightful in every way helped me see the girl in the mirror in a more positive light again. I might not be a supermodel, but I certainly wasn’t ugly. So why had a spent a long period of an otherwise happy life feeling that I was? And if I felt that way, surely other women felt that way too.

This inspired me to start thinking on beauty. Where do messages about beauty find us, how do they affect us, how do different women respond to these messages differently? What is beauty? How does a modern feminist reconcile her own empowerment with very real feelings of physical inadequacy?

These thoughts and more were bubbling in the back of my brain when one night, inspiration struck. I was at home alone, working on the edits to my YA sci-fi novel, Parched, when a concept popped in my head. A serum that turns you pretty: objectively, definitively. But only for a week at a time.

“Hm,” I thought, putting my notes aside. “That’s interesting.” Less than a minute later, a scene began playing in my head, as crystal clear as a feature film. Three young women. A tiny bottle of Pretty, something from a modern fairytale. An impossible transformation, as visceral and gross as it was funny and unexpected. Someone comes home—ah, an excuse is needed!

What next? Who knows… As soon as the scene stopped playing–a gift from on high, a missive from the muse–I knew, without a doubt, that was a novel. A year and a half later, I finished The Regulars. 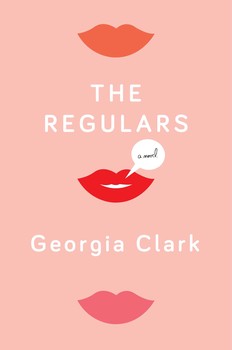 The Regulars
by Georgia Clark

A fierce, feisty, and “wonderfully entertaining” (Scott Westerfeld, author of Uglies) debut with a magical twist about three ordinary, regular girls who suddenly have their fantasies come true…or do they?

Best friends Evie, Krista, and Willow are just trying to make it through their mid-twenties in New York. They’re regular girls, with average looks and typical quarter-life crises: making it up the corporate ladder, making sense of online dating, and making rent.

Until they come across Pretty, a magic tincture that makes them, well...gorgeous. Like, supermodel gorgeous. And it’s certainly not their fault if the sudden gift of beauty causes unexpected doors to open for them.

But there’s a dark side to Pretty, too, and as the gloss fades for these modern-day Cinderellas, there’s just one question left:

What would you sacrifice to be Pretty?