Whether you’re a devoted vegetarian or can’t imagine life without a juicy cheeseburger or a fried chicken drumstick, it’s more important than ever to know where your food is coming from. Many of us are trying to eat less meat, for our health or for animal welfare or to preserve the environment. But if you can’t imagine giving up meat, don’t despair—scientists have actually developed real meat, cultivated in a lab, that doesn’t require killing any animals at all!

Paul Shapiro is the author of the new book CLEAN MEAT, which explores the advances in this fascinating arm of food science, and tells us just why this futuristic idea is well on its way to being on every dinner table.

Read on for an excerpt from CLEAN MEAT:

Our species is facing a crisis: as the global population swells, just how are we going to feed billions more people on a planet already suffering from a shortage of natural resources?

Projections show that by 2050 there’ll be nine to ten billion humans walking the earth. If most of them have the means to eat as lavishly as Westerners—particularly Americans—do today, it’s hard to see how we can support the massive amount of land and other resources that will be needed to satisfy this demand. For the American palate alone, more than nine billion animals are raised and slaughtered for food annually, not counting aquatic animals like fish, who are counted in pounds, not as individual animals. In other words, more animals are used for food in America in just one year than there are people on the planet. And nearly all of those animals are confined for life inside factories that more closely resemble gulags than farms.

As many sustainability experts observe, given how inefficient it is to raise animals rather than plants for our food, the earth just can’t accommodate such an increase in animal-product demand. The change in climate will be too great, the deforestation too severe, the water use too massive, and the animal cruelty too unbearable.

To put the problem in perspective, imagine walking through the poultry aisle of your local supermarket. For each chicken you see, envision more than one thousand single-gallon jugs of water sitting next to it. Then imagine systematically, one by one, twisting the cap off each jug and pouring them all down the drain. That’s about how much water it takes to bring a single chicken from shell to shelf. In other words, you’d save more water skipping one family chicken dinner than by skipping six months of showers.

And it’s not just chicken.

If we’re going to continue consuming meat, milk, and eggs at anywhere near the quantity we do today, we’ll need to get more efficient—much more efficient.

Today, a group of scientists and entrepreneurs is trying to accomplish just that. Their goal: to grow real meat so that omnivores can continue enjoying beef, chicken, fish, and pork without having to raise and slaughter animals. If these start-ups succeed, they may do more to upend our dysfunctional food system than perhaps any other innovation, while addressing many of the biggest problems we face— from environmental destruction and animal suffering to food-borne illness and perhaps even heart disease. These young companies are racing to make real a world in which we can have our meat and eat it, too: where we can enjoy abundant amounts of meat and other animal products without all the environmental, animal welfare, and public health costs.

Considering going vegan? These books will help you navigate the lifestyle. 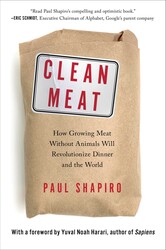 Paul Shapiro gives you a front-row seat for the wild story of the race to create and commercialize cleaner, safer, sustainable meat—real meat—without the animals. From the entrepreneurial visionaries to the scientists’ workshops to the big business board­rooms—Shapiro details that quest for clean meat and other animal products and examines the debate raging around it.Since the dawn of Homo sapiens some quarter million years ago, animals have satiated our species’ desire for meat. But with a growing global popula­tion and demand for meat, eggs, dairy, leather, and more, raising such massive numbers of farm animals is woefully inefficient and takes an enormous toll on the planet, public health, and certainly the animals themselves. But what if we could have our meat and eat it, too? The next great scientific revolution is underway—discovering new ways to create enough food for the world’s ever-growing, ever-hungry population. Enter clean meat—real, actual meat grown (or brewed!) from animal cells—as well as other clean foods that ditch animal cells altogether and are simply built from the molecule up. Whereas our ancestors domesticated wild animals into livestock, today we’re beginning to domesticate their cells, leaving the animals out of the equation. From one single cell of a cow, you could feed an entire village. And the story of this coming “second domestica­tion” is anything but tame.