Of all the lessons in The Hot Belly Diet, one of the most important goes against the conventional dieting wisdom that says you should eat several small meals throughout the day. This is harmful advice. Here’s why.

Although religions have maintained for centuries that fasting is good for the soul, the scientific evidence has been accumulating in just the last hundred years or so. In the early 1900s doctors began prescribing it to treat disorders like epilepsy, diabetes, and obesity. But today we have an impressive body of research to show that intermittent fasting, which includes everything from periodic fasts lasting a few days to merely skipping a meal or two on some days of the week, can increase longevity and delay the onset of diseases that tend to cut life short, including dementia and cancer. The exact mechanism is still an active area of research, but we think that part of the benefits stem from the creation of certain biomolecules during the fast that ultimately protect the body. Intermittent fasting mildly stresses the body, resulting in a revving of your body’s cellular defenses against molecular damage or cell death. We know, for instance, that fasting triggers higher levels of brain-derived neurotrophic factor (BDNF), a protein that helps prevent brain cells from dying. Low levels of BDNF are associated with numerous brain-related disorders, from depression to Alzheimer’s disease. Fasting also ramps up your body’s ability to remove damaged cells and molecules. Moreover, it’s famous for increasing the body’s responsiveness to insulin (hence its role in helping treat insulin resistance and diabetes). No joke: A recent study at the Salk Institute for Biological Studies in La Jolla, California, revealed that mice did not become obese or show dangerously high insulin levels after they fasted for the rest of each day following a fatty diet for eight hours.

Despite all this good news about intermittent fasting, in America we’ve created a culture of habitual eaters and snackers 24/7. We’ve simultaneously created a culture of chronic conditions, including obesity. My heart sinks when I see frequent eating touted as a health-beneficial practice. Now that food is accessible virtually everywhere, we can hardly tolerate missing a meal. And we’ve deceived ourselves into thinking that hunger is the enemy and that grazing is good. This couldn’t be further from the truth.

Experts recommending six meals a day claim that eating roughly every three hours will improve your metabolism, control blood sugar, decrease cravings, and spur weight loss. But scientific studies don’t support these claims. In fact, medical literature has proven otherwise. In 1997 the British Journal of Medicine and Medical Research conducted a thorough review of all studies that examined whether or not frequent eating fueled the body’s metabolism and spurred weight loss; it didn’t find any evidence that eating six meals a day boosts metabolism, fat burning, or weight loss. According to the American Dietetic Association (ADA), if you eat more frequently when you’re just slightly hungry, your risk for overeating is higher. It’s clear that we can forget about that strategy. And what about the idea that frequent meals help control blood sugar? Indeed, eating mini meals throughout the day may make you feel more stable in the short term, but in the long term, this will backfire. When you eat every two to three hours, your body becomes dependent on a continual supply of food. So you’ll lose an innate ability to endure missing a meal, and, as a result, your blood sugar will crash.

The New York Academy of Sciences published a report in 2002 stating that grazing all day long can put one at risk for type 2 diabetes, heart disease, and stroke. Why didn’t you read that study? Because the lobbying from food manufacturers that say grazing is good (especially on their beautifully packaged products and tantalizing snacks) is a powerful one. We’re taught to think that grazing is healthful dietary medicine, and we forget that people with blood sugar issues are typically eating meals full of refined carbs, sugars, stimulants, and unhealthy fats.

Here’s another way to understand this cause-and-effect. When the body is fed every two to three hours, it uses fuel from those meals rather than burning its fat stores. So the body adapts to being spoon-fed consistently without needing to dig into its fat storage. Conversely, when you eat three meals a day and don’t snack in between, the body is forced to turn to fat. When your body uses fat as an active fuel, you will experience increased energy, ability to focus, stable moods, better sleep, fewer cravings, and, of course, effortless weight loss.

The idea that less—eating fewer meals as opposed to many mini-meals even if the total calories adds up to be the same—really is more when it comes to weight loss was further put to the test when a study came out in 2013 proving the power of just two meals a day. As reported by NBC News, the study was presented at the American Diabetes Association conference, revealing that people with type 2 diabetes who consumed two large meals a day lost more weight than when they ate six smaller meals with the same total amount of calories.

The researchers, led by Hana Kahleova of the Institute for Clinical and Experimental Medicine in Prague, told the fifty-four study participants to choose one of two types of eating plans for twelve weeks: either six mini-meals or just large breakfasts and lunches. Both diet regimens reduced each person’s intake by five hundred calories but they entailed the same nutrient and caloric content. Registered dietitians regularly met with the volunteers and half of them were given all of the meals. Although the people lost weight under both eating plans, those eating a big breakfast and lunch experienced more weight loss than those eating the six smaller meals.

In reality, it’s too hard for most of us to cut out dinner entirely and rely just on two meals a day. The practical takeaway here is not so much about skipping dinner as it is eating more during midday and less frequently overall, which is exactly what The Hot Belly Diet is going to train your body to do without feeling deprived. Previous studies have already shown that if you ate three times a day, you’d receive the same benefits of eating just two times. So it’s really minimizing how often you eat, because you’ll tend to eat less overall. The Hot Belly Diet encourages a nutritious breakfast, a hearty lunch, and a lighter dinner with no snacking in between. 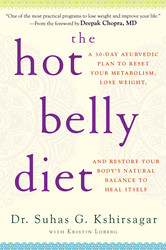 The Hot Belly Diet: A 30-Day Ayurvedic Plan to Reset Your Metabolism, Lose Weight, and Restore Your Body’s Natural Balance to Heal Itself
by Suhas G. Kshirsagar

Drawing on ancient Indian practices and principles, The Hot Belly Diet shows you how to optimize your digestive powers to foster rapid weight loss and vibrant health.At the core of this three-phase diet that makes lunch the most important meal of the day is a dish called khichadi (pronounced kitch-a-de)—a complete but incredibly easy-to-make meal that helps clear out your “ama,” or the digestive sludge that antagonizes weight loss, provokes hormonal imbalances, and ultimately triggers inflammation—the root cause of virtually all disease. The Hot Belly Diet changes your relationship with food to make healthy eating—and living—effortless.Whether you’re suffering from a chronic condition, looking to prevent future illness, or just want to feel your best every day, The Hot Belly Diet will re-establish your body’s natural balance, creating a thinner, healthier, and happier you.