Despite the fact that for the majority of people diets don’t work and weight lost is very soon weight gained back, I often find resistance to the idea that eating dietary fat will not make you gain fat. In fact, if done correctly, eating fat will even help you burn more fat. From Primal Fat Burner.

Let’s quickly run the numbers to put this in perspective. The breakdown and utilization of fats create four times more energy than that of utilizable carbohydrates or protein on average, yet fat has only twice the caloric density of carbohydrate. So by doubling the caloric intake—something that sounds scary to calorie counters—fat actually delivers four times the energy. That’s one reason why looking at calorie counts on foods is fairly useless when it comes to weight loss. It doesn’t tell you what happens when that food is turned into utilizable energy.

Furthermore, how we make use of the food we eat is dependent not upon its caloric content but upon the complex interaction of our hormones and enzymes in response to that food. The human body is not a heat engine, but rather a complex biochemical factory where structural and complex biochemical needs are given the highest priority; whatever is left over is used for immediate energy or stored energy. Dietary fat actually fulfills a host of structural and functional needs before it is used to fill energetic needs—or before getting stored as excess energy on your thighs.

Relying on fat as your primary source of fuel also affects your appetite through several different mechanisms. First, eating enough fat creates healthy leptin levels, which help keep your appetite in check. A hormone that acts as a fat sensor, leptin is found in fat tissue and helps your brain decide whether to make you hungry or not, and whether to store or burn fat. It is arguably your body’s single most important hormone, regulating all others. When you aren’t eating enough fat, leptin makes you hungrier; it prompts you to make more fat from other foods in your diet (namely, carbs), which then keeps you hungry.

Eating fat while eliminating sugar and starch also helps dampen ghrelin, the hunger hormone that acts as an appetite stimulant. The more quality fat your meal contains and the more nutrient-dense it is, the less ghrelin your body produces and the less hungry you feel. An effective ketogenic state can also lower the amount of ghrelin your body produces over time. When you attempt weight loss the old way, by simply counting calories, ghrelin levels tend to creep up as the weight comes off, making it harder and harder to suppress cravings and the desire to eat. In a state of fully effective ketosis, though, instead of getting hungrier as you lose weight, you gain better appetite control. And without needing and generating so much insulin, you will automatically store less fat. This can make weight loss virtually effortless. It’s really the amount and quality of the energy you make that count, and eating enough fat to feel sated will always work best. It’s almost impossible to overeat fat because of its inherent richness and satiating quality. After all, when was the last time you saw anyone bingeing on lard? A little fat really goes a long way to satisfy you!

It turns out that a high-fat, low-carbohydrate way of eating can flip a switch in the way your genes are expressed, helping to code for specific proteins that increase your metabolism of fats. This also helps your body burn even more fat than ever before during exercise—even during higher anaerobic intensity.

All of this helps to explain why some impressive studies have observed that a ketogenic diet can be used safely and effectively for weight reduction (and long-term weight loss) in obese patients. Others have shown that it leads to a significant decrease in the level of triglycerides, total cholesterol, LDL, and glucose, and a significant increase in the level of HDL. 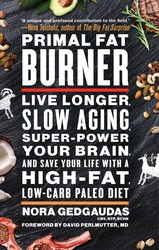 Primal Fat Burner: Live Longer, Slow Aging, Super-Power Your Brain, and Save Your Life with a High-Fat, Low-Carb Paleo Diet
by Nora Gedgaudas

Author of the popular Primal Body, Primal Mind and widely recognized Paleo expert and nutritionist, Nora Gedgaudas presents a revolutionary, scientific, accessible high-fat diet for maintaining health, losing weight, and reversing some chronic diseases. Gedgaudas returns with advice that may sound counterintuitive: Eat fat to burn fat. In her new book, Primal Fat Burner, she explains the benefits and science behind a ketogenic (or fat-burning) diet, which switches your metabolism from a dependence on sugar to running on healthy fats. As Gedgaudas reveals, numerous studies in recent years refute the long-promoted anti-saturated fat and anti-cholesterol agenda. Now, Gedgaudas explains the science that fat isn't a “no-no” but rather a “yes-yes”—if you know the right kinds of fats to eat. In her accessible, enjoyable style, she also lays out a practical meal plan with recipes. When you follow a ketogenic diet, you consume fewer calories overall