Seafood isn’t actually as heart-healthy as people claim it to be. Here’s why, from The Forks Over Knives Plan: A 4-Week Meal-by-Meal Makeover.

We are always surprised by how many people continue to think that fish is beneficial and important to include in the diet, even long after they become convinced that mammals are not health foods. Much of this perception stems from periodic reports that some study or another has found that fish is “heart healthy” or “good for our brains.” In our review of these studies, time and again we find data is misinterpreted and faulty conclusions are drawn from otherwise reasonable research. Unfortunately, such misinterpretations have occurred so frequently that a false narrative has developed.

One of the most egregious examples of this phenomenon is the poor interpretation of the famous Okinawan Centenarian Study, published in 2007. In this twenty-five-year study, sponsored by the Japanese Ministry of Health, researchers examined the diet and lifestyle of hundreds of elderly Japanese renowned for their longevity and relative freedom from the chronic ailments that typically plague Westerners in their later years. The fundamental message of the study is sound: Diet and lifestyle matter. We take issue, though, with the common conclusion that many draw from this research; that is, that the fish in the Okinawans’ diet was a major contributing factor to their long life spans and extraordinary good health. Now here’s a fact that may surprise you: Only 1 percent of the calories consumed by the Okinawans came from fish; the vast majority of their diet—69 percent—came from sweet potatoes! So the indelible perception that the Okinawans consumed a fish-heavy diet is demonstrably false.

The practice of misinterpreting data is not unusual. Studies from Mediterranean countries follow this pattern, too. The benefits of a diet high in fruits, vegetables, and whole grains frequently get credited to small amounts of fish in the diet (just like they are often credited to olive oil and wine). What is happening here? We have meaningful long-term studies presented by the researchers with care, which are then pored over by individuals or organizations who cherry-pick data, often to reinforce a specific agenda. The big picture is ignored in favor of subjective claims and reporting, and the public receives false takeaway messages like “Eat more fish!”

The bottom line with fish is that it’s an animal that swims in water. As our friend and teacher Dr. John McDougall likes to say, “A muscle is a muscle, whether it comes from a chicken, cow, or fish.” In other words, the nutrient profile of all animal products—i.e., high in fat, acid, and cholesterol, and low in fiber and carbohydrates—is as true for fish as it is for beef and other meats. In fact, although fish is often marketed as a wise, “heart-healthy” food choice, it has as much cholesterol as beef, chicken, and pork. 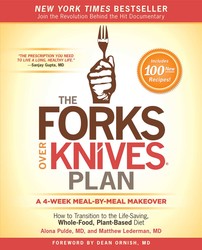 The Forks Over Knives Plan: How to Transition to the Life-Saving, Whole-Food, Plant-Based Diet
by Alona Pulde and Matthew Lederman

The trailblazing film Forks Over Knives helped spark a medical and nutritional revolution by making the case that modern diseases can be prevented and often reversed by leaving meat, dairy, and highly refined foods off the plate, and adopting a whole-food, plant-based diet instead. Now, for the first time, The Forks Over Knives Plan shows you how to put this life-saving (and delicious) diet into practice in your own life. Dig into the tasty recipes for Chocolate Raspberry Parfaits, Lemon-Oatmeal Cookies and other goodies.