In the Perfect Health Diet, we explain why mixing and matching foods not only makes them taste delicious but reduces their toxicity.

It looks as though evolution designed the food reward system to get us to eat foods in combination. Does that make sense?

It does, because combining foods increases their nourishment and reduces their toxicity.

For good nourishment, we need a balanced diet—a diet that includes a broad range of nutrients. No single food has a broad enough range of nutrients. It’s easiest to achieve balance if we combine a diversity of plant and animal foods at every meal. The food reward system encourages us to do that.

Toxicity is another problem with unbalanced diets. A famous rule of toxicology—Paracelsus’s rule—is that “the dose makes the poison.” Small amounts of a toxin will be harmless, but large amounts very dangerous. Many foods are like this: a small amount of bok choy is healthful, but two pounds a day of raw bok choy can be deadly. Recently a Chinese woman needed four weeks in the hospital to recover from that amount.

So the food reward system encourages us to mix and match foods, eating only a modest amount of any one food.

Food combining is beneficial for starchy carbohydrates. You may have heard of the “glycemic index,” a measure of how high blood glucose levels rise after eating a food. In general, blood glucose levels below 140 milligrams per deciliter are safe, but glucose becomes increasingly toxic above that level; and higher-glycemic-index foods are more likely to increase blood glucose to a dangerous level.

But the glycemic index is radically reduced when foods are combined:

Sauces in traditional cuisines typically combine an acid, such as lemon juice or vinegar, and a fat, such as olive oil or coconut milk. These sauces beneficially reduce the glycemic index of a meal, reducing its potential to induce hyperglycemic toxicity. (They are also nourishing in their own right.) 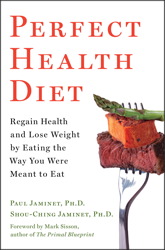 In Perfect Health Diet, Paul and Shou-Ching Jaminet explain in layman’s terms how anyone can regain health and lose weight by optimizing nutrition, detoxifying the diet, and sup­porting healthy immune function. They show how toxic, nutrient-poor diets sabotage health, and how on a healthy diet, diseases often spontaneously resolve. Perfect Health Diet makes weight loss effortless with a clear, balanced, and scientifically proven plan to change the way you eat—and feel—forever!