This super-popular diet isn’t right for everyone–men who are predisposed to heart or vascular disease should steer clear. Learn why from The Life Plan Diet.

Dieting trends of late have circled back to an old fad: very low-carb. Today it’s packaged as a “Paleo” approach. Paleo diets instruct followers to eat like the cavemen did as hunters and gatherers and forgo all processed foods that contain grains, including all simple carbohydrates. These diets do a great job of controlling binge eating and cravings, especially for those who are carbohydrate or gluten sensitive, because the program rapidly achieves control over blood sugars and insulin levels, and thereby prevents the vicious cycle of high insulin levels followed by low blood sugar levels—the root cause of cravings.

However, the diet encourages high protein consumption based on foods with unhealthy levels of saturated fats. These include red meats, organ meat such as sweetbreads, lamb, pork, chicken liver, bacon, and dairy products. Even lean options eaten in excess will end up promoting a high-saturated-fat diet. When your high-protein sources are also high in saturated fats, your heart is going to suffer. Any man who wants to pursue a Paleo diet needs to make sure he hasn’t inherited risk factors for heart disease, and that his cholesterol panel is in good shape. I’ve had patients who had great cholesterol panels, and when I repeated the testing after they followed a Paleo program for as little as three months, their levels had gone way up. Simply put, the Paleo approach is not a great option for men who have any predisposition to heart disease or have evidence of vascular disease.

We also do not know what the benefits of following a gluten-free diet are if you are not gluten sensitive and do not suffer from celiac disease. Approximately one in 100 Americans suffer from celiac, a condition that occurs when one or two genetic mutations cause the immune system to attack the walls of the intestine after one eats foods containing the protein gluten. Symptoms vary, but can include vomiting, chronic diarrhea, or constipation. Gluten sensitivity is different. It is described when someone who does not have celiac shows physical and often mental health improvements on a gluten-free diet, and worsens again when gluten is eaten. Many believe that nonceliac gluten sensitivity is a wide, unseen epidemic. Still others believe that anyone following a gluten-free diet will at least lose weight. However, the problem I see is that if you don’t have gluten sensitivity or celiac, you are missing out on some important nutrients that are found in healthy grains. A single blood test can let you know if you have a true gluten sensitivity or intolerance. However, the gold standard for positively identifying celiac disease is an intestinal biopsy. 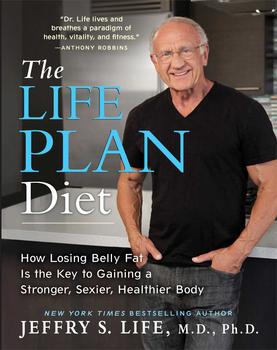 Packed with easy everyday menus and rules for eating out, tips for enhancing muscle mass and bone strength, foods that naturally increase testosterone levels and growth hormone, and good food habits for optimizing brain function, The Life Plan Diet is a proven and wildly successful method to help men over fifty lose weight and remain vital.