What’s wrong with food? For 50 years, we’ve been laying the blame on nutrients—Fat! Carbs! Salt! Sugar! But the harder we try, the worse it gets. Less than a third of Americans are slender today, and obesity is the number one cause of disease. In The Dorito Effect, I argue we’ve been getting it all wrong. The problem with food—and why so many people eat so much of it—comes squarely down to one thing: the way it tastes. Restaurants and supermarket aisles today are filled with fake thrills and nutritional lies.

How much do you know about the flavor of the food you love? Take this quiz and find out!

ANSWER: D
In 2014, the journal Science reported humans can distinguish more than a trillion different aromas. Since smell is an integral part of how we experience the flavor of food, this demonstrates that the ability to taste and appreciate what we eat outperforms our other senses.

ANSWER: E
Modern tomato plants have been bred to produce huge harvests of tomatoes with thick skins and a long shelf life. But the tomatoes are watery, and the modern plant has lost the ability to produce the flavors we love.

How old are the chickens we purchase in most grocery stores today?
a) 4 weeks
b) 6 weeks
c) 8 weeks
d) 10 weeks

ANSWER: B
As Julia Child put it, modern chickens taste like teddy-bear stuffing.

Which of the following ingredients is found in yogurt, pig feed, and cigarettes?
a) bacterial culture
b) flavorings
c) sugar
d) humectants

ANSWER: B
Getting young pigs to eat manufactured pig feed is a common problem for farmers. Flavor chemicals sway them into consuming a food they aren’t inclined to eat. Is that why food and cigarette companies are adding the very same chemicals to their products?

Which of the following groups of foods DO NOT frequently list “natural flavors” on the ingredients list?
a) sour cream and onion dip, soft drinks, powdered gravy, frozen pizza
b) raw chicken, canned tuna, tea, soy milk
c) beer, chocolate milk, tomato sauce, butter
d) none of the above

ANSWER: D
Natural flavors sound healthy, given that FDA deems them “natural,” but they are very often chemically identical to artificial flavors. The distinction has nothing to do with the flavoring chemicals themselves, but how they’re made. Flavorings are so potent it can take less than a gram to flavor an entire meal.

ANSWER: C
According to the market research firm Euromonitor International, the American flavor market exceeds that 300,000 tons and the world flavor market stands at more than 1.4 million tons. 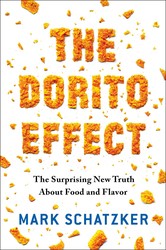 The Dorito Effect: The Surprising New Truth About Food and Flavor
by Mark Schatzker

A lively and important argument from an award-winning journalist proving that the key to reversing America’s health crisis lies in the overlooked link between nutrition and flavor.In The Dorito Effect, Mark Schatzker shows us how our approach to the nation’s number one public health crisis has gotten it wrong. The epidemics of obesity, heart disease, and diabetes are not tied to the overabundance of fat or carbs or any other specific nutrient. Instead, we have been led astray by the growing divide between flavor—the tastes we crave—and the underlying nutrition.