Fasting–even brief, sporadic fasts–not only helps you lose weight, but reduces your risk of age-related diseases like cancer and diabetes. From the bestselling book, The FastDiet: Lose Weight, Stay Healthy, and Live Longer with the Simple Secret of Intermittent Fasting.

The fact that prolonged starvation is clearly very bad for you does not imply that short periods of intermittent fasting must be a little bit bad for you. In fact the reverse is true. This point was vividly made to me by Dr. Valter Longo, director of the University of Southern California’s Longevity Institute. His research is mainly into the study of why we age, particularly concerning approaches that reduce the risk of developing age-related diseases such as cancer and diabetes.

I went to see Valter, not just because he is a world expert, but also because he had kindly agreed to act as my fasting mentor and buddy, to help inspire and guide me through my first experience of fasting.

Valter has not only been studying fasting for many years, he is also a keen adherent of it. He lives by his research and thrives on the sort of low-protein, high-vegetable diet that his grandparents enjoy in southern Italy. Perhaps not coincidentally, his grandparents live in a part of Italy that has an extraordinarily high concentration of long-lived people.

As well as following a fairly strict diet, Valter skips lunch to keep his weight down. Beyond this, once every six months or so he does a prolonged fast that lasts several days. Tall, slim, energetic, and Italian, he is an inspiring poster boy for would-be fasters.

The main reason he is so enthusiastic about fasting is that his research, and that of others, has demonstrated the extraordinary range of measurable health benefits you get from doing it. Going without food for even quite short periods of time switches on a number of so‑called repair genes, which, as he explained, can confer long-term benefits. “There is a lot of initial evidence to suggest that temporary periodic fasting can induce long-lasting changes that can be beneficial against aging and diseases,” he told me. “You take a person, you fast them, after twenty-four hours everything is revolutionized. And even if you took a cocktail of drugs, very potent drugs, you will never even get close to what fasting does. The beauty of fasting is that it’s all coordinated.”

Most of the early long-term studies on the benefits of fasting were done on rodents. They gave us important insights into the molecular mechanisms that underpin fasting.

Since then, numerous studies have confirmed, at least in rodents, the value of fasting. But why does fasting help? What is the mechanism?

Valter has access to his own supply of genetically engineered mice known as dwarf or Laron mice, which he was keen to show me. These mice, though small, hold the record for longevity extension in a mammal. In other words, they live for an astonishingly long time.

The average mouse doesn’t live that long, perhaps two years. Laron mice live nearly twice that, many for almost four years when they are also calorie restricted. In a human, that would be the equivalent of reaching almost 170.

The fascinating thing about Laron mice is not just how long they live, but that they stay healthy for most of their very long lives. They simply don’t seem to be prone to diabetes or cancer, and when they die, more often than not it is of natural causes. Valter told me that during an autopsy, it is often impossible to find a cause of death. The mice just seem to drop dead.

The reason these mice are so small and so long-lived is that they are genetically engineered so that their bodies do not respond to a hormone called IGF-1, insulin-like growth factor 1. IGF-1, as its name implies, has growth-promoting effects on almost every cell in the body. In other words, it keeps your cells constantly active. You need adequate levels of IGF-1 and other growth factors when you are young and growing, but high levels later in life appear to lead to accelerated aging and cancer. As Valter puts it, it’s like driving along with your foot flat down on the accelerator pedal, pushing the car to continue to perform all the time. “Imagine, instead of occasionally taking your car to the garage and changing parts and pieces, you simply kept on driving it and driving it and driving it. Well, the car, of course, is going to break down.”

Valter’s work is focused on trying to figure out how you can go on driving as much as possible, and as fast as possible, while enjoying life. He thinks the answer is periodic fasting. Because one of the ways fasting works is by making your body reduce the amount of IGF-1 it produces. 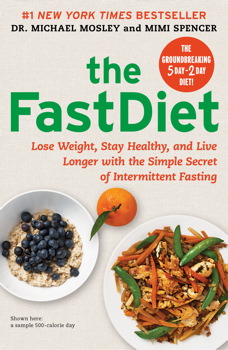 The FastDiet
by Michael Mosley and Mimi Spencer

Is it possible to eat normally—five days a week—and become slimmer and healthier as a result? Simple answer: yes. You just limit your calorie intake for two nonconsecutive days each week—500 calories for women, 600 for men. You’ll lose weight quickly and effortlessly with The FastDiet.