There are several different kinds of fat. Not all of them are bad for you. Learn which ones to consume and which ones to avoid using this short guide from Bob Greene’s The Best Life Guide to Managing Diabetes and Pre-Diabetes.

Everyone has to watch their intake of unhealthy fats, but if you have diabetes, you have to be extra vigilant. As you’ll learn shortly, unhealthy fats can worsen insulin resistance and make your already heightened risk for heart disease that much greater. It’s not the total fat consumption that matters so much; it’s the type of fat consumed that affects your health. Your mission: to bring in more healthy fats and root out the unhealthy ones. We’re not necessarily suggesting that you add more fat to your diet, although if you’ve been on a very-low-fat diet and aren’t enjoying it, that may be a good idea. The goal here is to replace the unhealthy fatty foods with foods containing healthy fats.

If ordering a side of guacamole with your chicken fajita, snacking on a handful of mixed nuts, and sauteéing your favorite vegetables in olive oil and garlic all sound appealing to you, you’re already a fan of healthy fat. The reason these foods — avocados, nuts, and olive oil — are considered healthy fats is because of the type of fatty acids they contain. These and other foods we think of as fat — oils, butter, margarine, the fat surrounding a steak or sunder the skin of a chicken — are actually composed of different types of fatty acids. And it’s the fatty acids that are either good or bad for your body.

The different types of fatty acids have different effects on your health; here’s the scoop.

Monounsaturated fatty acids are considered healthy because they don’t raise LDL (the “bad” cholesterol that contributes to clogged arteries and heart disease) and they do raise HDL (the “good” form that actually removes cholesterol from your body). Plus, they’ve been linked to greater insulin sensitivity. Nearly all the monounsaturated fat in our diet comes from oleic acid.

Sources: Olive oil and canola oil are loaded with monounsaturated fats, so make these your staple oils. Other mono-rich foods include avocados, almonds, cashews, peanuts, and sesame seeds.

Polyunsaturated fatty acids, which fall into the healthy fat category because they do not raise LDL, include two types:

Omega-3 fatty acids offer a host of health benefits, including reducing inflammation, which, in turn, helps prevent and may even treat diseases such as rheumatoid arthritis and heart disease. These fats also help prevent blood clots and lower blood pressure, can improve mood, and may increase IQ in children. The health effects are so great that there’s a case to be made for taking Omega-3 supplements in addition to what you get from your diet. The three main types of omega-3s are:

Omega-6 fatty acids have also been linked to heart disease prevention. Some argue that because omega-6s can be converted into substances that encourage inflammation, they may actually be bad for the heart and other tissues. However, a 2009 review by the American Heart Association found that most of the evidence points to a heart-protective effect. The most common omega-6 in our diet is linoleic acid, which, like ALA, is an essential fatty acid. Most people get more than their share of omega-6s because these are the predominant fats in many processed foods, such as frozen foods, baked goods, and salad dressings, as well as restaurant fare. There are also omega-6 fatty acids in olive and canola oils, which should become your staple oils for home use.

Unhealthy Fats
Cut back on foods high in saturated fat, and make it a point to avoid sources of trans fat altogether.

Saturated fatty acids are considered unhealthy fats because when eaten in excess, they raise LDL (“bad” cholesterol) and have been linked to an increased risk for heart disease, breast, colon, prostate, and pancreatic cancer. To make matters worse, a high intake of saturated fat appears to increase insulin resistance.

Sources: You can’t avoid saturated fat completely because it’s in many healthy foods, including olive oil, but you can limit the loaded sources, such as butter, cream, full-fat cheese, whole milk, fatty meats, and chicken skin. A few plant foods, such as palm and coconut oil, are also high in saturated fat. Fortunately, the type of saturated fatty acid in the cocoa butter in chocolate (stearic acid) does not raise LDL. Sometimes you luck out!

Trans-fatty acids are the most unhealthy fats of all. Not only do they raise LDL, but they also lower HDL (“good” cholesterol). These fats appear to promote visceral fat, the deep belly fat that surrounds the organs, which can trigger heart disease and insulin resistance. Although trans fat exists in small quantities naturally in fatty meats and high-fat dairy foods, the major source is man-made partially hydrogenated vegetable oil, a solid fat that is used in some commercial baked goods and makes food more shelf-stable. 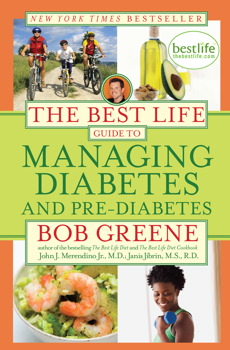 Coping with the unique challenges of living with these conditions can feel like a full-time job, but The Best Life Guide to Managing Diabetes and Pre-Diabetes gives you a gradual, three-phase plan designed to improve your blood sugar and stave off heart disease, neuropathy, and other diabetes- and pre-diabetes-related conditions.