Changing habits can be extremely hard. The key is figuring out what to replace a bad habit with, because breaking it without filling it with something else is a recipe for failure. Here’s what worked for me. From Thinspired: How I Lost 90 Pounds—My Plan for Lasting Weight Loss and Self-Acceptance.

I found that after getting home from work. I found that after getting home from a stressful day, all I would want to do is unwind. Even with my healthy eating in place, that often meant roaming the kitchen nibbling: a few grapes, some almonds, a piece of grilled chicken, a few forkfuls of mashed sweet potato, some peanut butter. It might seem like nothing, but it added up to several hundred calories every day. But that’s not what bothered me. What bothered me about it is that I wasn’t hungry at all. I was merely eating as a form of release. Relaxation was my reward. So I set out to change the habit.

I decided that my new habit would be to make a cup of chamomile tea the moment I got home. Chamomile tea has calming properties, so I figured it would address my real issue, which was the need to de-stress. Forming that new, extremely simple habit, took a Herculean effort. I’d walk through the door and want to do a million other things before making the tea. But the longer I waited, the less likely that it was going to happen. I had to force myself to immediately make the tea after walking through the door. I’d even talk myself into it on the street was I was approaching home. “You’re going to make tea, ok?” Eventually, it worked. Making the tea became natural. But it took time.

So just how long does it take to form a new habit? Well, it depends on how complicated it is. While conventional wisdom suggests it takes about three weeks, that’s not always true.

One study asked ninety-­six people to pick a behavior they wanted to turn into a habit, take note of how often they actually did it, and how natural it felt. Goals included things like eating a piece of fruit with lunch everyday, or doing a daily 15-­minute run.

After eighty-­four days, researchers found that on average, it took sixty-­six days for a habit to form. That’s more than two months! But it wasn’t the same for everyone. Those whose goals were easier, like drinking a glass of water after breakfast, formed a habit in as little as twenty days.

Harder goals took longer to become habits, especially exercise-­related ones. The study found that for some people, exercise still hadn’t become a habit after the eighty-­four days was up.

This shouldn’t be discouraging. The good news is that at some point, the new habit will be formed. The harder the struggle, the bigger the gain. The important thing is to stick with it, repetitively, and consistently. 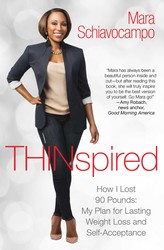 Fear of repeating dieting setbacks or experiencing new ones can be a major mental obstacle that keeps many from making healthy changes.

This inspirational book from ABC News correspondent Mara Schiavocampo takes you on her journey of weight loss—and helps you shed pounds and find peace, health, and happiness in the process.