I picked the ingredients in my signature Blends in my newest book, Sneaky Blends, because they’re versatile and can be used in lots of different recipes. They’re also easy to find in any grocery store and incredibly satiating—a must for any weight loss plan. But above all, they are nutritional superstars. Take a look at some of the health benefits you’ll reap from these good guys.

Beets
They’re popping up on menus everywhere—and their health benefits are incredible. Beets contain a group of phytochemicals called betalains, which have powerful antioxidants, as well as anti-inflammatory and liver detoxifying abilities. They also boost cell repair and regeneration. And the high fiber content of beets improves digestion and regularity—expediting the elimination of toxins. There’s even some evidence that the compounds in beets may improve blood flow, energy, and athletic performance. If you’re not a beet lover, their flavor is not front and center in my blends—so don’t pass them by. I’ve converted so many people!

Black Beans
Recent research has linked this legume with improved digestion and gut health by helping to feed the “good bugs” in your system. There’s also strong evidence that black beans can help with weight loss, thanks to their high fiber and protein content—a unique combo that makes them particularly satisfying. In fact, one cup of black beans packs half of your recommended daily fiber intake—and a third of your protein requirement. They’ve also been shown to lower diabetes, heart disease and colon cancer risk. Black beans are superstar sources of iron, folate, vitamin B and omega-3 fatty acids, as well.

Blueberries
Blueberries are among the fruits highest in antioxidants, according a USDA study. Also, research has found that freezing blueberries doesn’t affect their antioxidant levels. In fact, a recent South Dakota State University study actually found that frozen blueberries may have a higher, more bioavailable concentration of anthocyanins (a group of antioxidant compounds) than fresh ones. They’re also one of the most nutrient-dense fruits—loaded with vitamins A and C, zinc, potassium, iron, calcium, magnesium and fiber—and have even been shown to help reduce belly fat.

Broccoli
This cruciferous veggie is loaded with detoxing glucosinolates—a group of phytonutrients that help obliterate and remove harmful contaminants from your body. And while some forms of cooking can destroy these beneficial compounds, steaming has been found to be the best at retaining them—which is part of the reason I recommend prepping them this way, as opposed to boiling or blanching. Broc is also very high in protein, fiber and calcium—and just half a cup delivers 100 percent of the recommended daily value of vitamin C, an antioxidant that boosts immunity, lowers heart disease risk and even may prevent cancer. Overall, it’s one of the most nutrient-rich foods we can eat.

Butternut Squash
Did you know that butternut squash is a rich source of Omega-3s? It’s true. And even though it’s a starchy vegetable, about half of those starches are a type that research has shown to have strong antioxidant and anti-inflammatory powers. They may also help regulate insulin levels. Butternut squash is rich in vitamins A and C, energizing B vitamins, as well as fiber.

Cauliflower
The phytonutrients in this cruciferous vegetable help reduce oxidative stress and lower inflammation in the body—both of which support your body’s natural detox process. It’s also loaded with folate, fiber and vitamin C—which some research has shown can promote fat loss. I also love cauliflower because it adds a lot of bulk, but has so few calories. An entire head of this veggie only has 147 calories.

Carrots
Those rabbits are onto something! Not only do carrots boast high amounts of carotenoids—antioxidants that promote eye health and protect against certain cancers—they also contain glutathiones, compounds which bind to toxins and help clear them from your body. (They’re known for their liver detoxifying powers.) Plus, carrots are rich in polyacetylenes, phytonutrients that work in tandem with carotenoids to prevent oxidative damage and reduce cancer risk. And can we talk about their gorgeous hue? Research shows that orange/yellow produce is the most protective against heart disease compared to other color groups of fruit and veg (like red and purple). A study published in the British Journal of Nutrition found that just 2 baby carrots (25 grams) contain enough of this good-for-you phytonutrient to reduce the risk of heart disease by 32 percent—and the more you eat, the further your odds drop.

Chickpeas
These legumes are inexpensive, incredibly nutritious and deeply satisfying. Studies have consistently linked chickpea consumption (or eating any legume, for that matter) to reduced BMI—because they contain slow-digesting carbs, lots of fiber and protein and are lower in energy density, all of which support weight control and weight loss. Additionally, about two-thirds of the fiber in chickpeas is the insoluble type that soaks up unwanted toxins in your digestive track and helps ferry them out of your system. They’re also an amazing source of folate, tryptophan, magnesium and iron, which crank up energy levels, boost brainpower and guard against heart disease and cancer.

Kale
I’ve been blending kale long before it became the darling of the produce aisle. It’s an excellent source of phytonutrients, called glucosinolates. When digested, your body converts them into a compound that is particularly effective at detoxing your body—from the chemicals and toxins in the foods we eat and drink—by acting directly on our genes. Kale glucosinolates have also been shown to have a host of powerful “anti” properties: They are anti-viral, anti-infective, anti-inflammatory and anti-cancer, to name a few. Hype well deserved, if you ask me.

Peas
Green peas are surprisingly satiating. In fact, one cup of them contains more protein than a large egg. They’re also a good source of fiber, vitamins C and K, potassium and iron—nutrients that support immunity, fight colds, protect against heart disease and all types of cancer, strengthen bones and rev up your energy level. And they’re high in omega-3 fatty acids.

Pumpkin
Like other orange-colored produce, such as carrots and sweet potatoes, pumpkin is a rich in beta-carotene—an antioxidant that helps neutralize free radicals and has been linked to cancer prevention. I often use 100 percent pure canned pumpkin, rather than go through the hassle of chopping and roasting fresh pumpkin. There’s good evidence that the canned stuff is just as nutritious—if not more—than fresh. So why not save yourself the time? Just be sure not to get the sweetened pie filling kind.

Raspberries
Raspberries are a potent source of ellagic acid—a flavonoid that binds to carcinogens and neutralizes them. (It’s actually used medicinally as a cancer fighter.) Ellagic acid also has an anti-inflammatory effect that may impact fatty tissues in the body—lowering obesity risk.

Spinach
Spinach is a nutrient powerhouse. It contains twice as much iron as most other greens and is an excellent source of calcium, folic acid, and vitamins A and C. It also has a high beta carotene content, which most people think only comes from orange vegetables. This offers great protection against asthma, all kinds of cancer, and heart disease. Additionally, spinach contains newly discovered compounds called glycoglycerolipids. Their purpose is to help the photosynthesis process—but research has also found that the glycoglycerolipids from spinach can actually protect the lining of the digestive tract from damage, particularly damage caused by inflammation.

Sweet Potatoes
For starters, they’re way more weight friendly than regular spuds—one cup of which causes a similar blood sugar spike-and-crash (leading to increased hunger and overeating) as eating a handful of jellybeans! The higher fiber content in sweet potatoes blunts this effect, while still delivering the filling, satisfying comfort food you crave. That’s why they’re often called the “anti-diabetic” food, because they actually stabilize blood sugar levels. Sweet potatoes are also loaded with beta-carotene, fiber, B vitamins, calcium, potassium and iron. And get this: Research has shown that when the cyanidins, peonidins and other phytonutrients in sweet potatoes pass through your digestive tract, they may lower the possible health risk from toxins like heavy metals (such as lead and mercury that may sneak into your diet) and oxygen radicals.

White Beans
This is a catchall term that includes navy, butter and cannellini beans. As with black beans, they’re incredibly satisfying, nutritious and inexpensive—and have been shown to support weight loss, thanks to their one-two punch of protein and fiber. White beans are also a good source of molybdenum—a trace element that your body needs to make and activate many of its natural detoxifying enzymes. And research shows they may lower your risk of heart disease and cancer. I also use them in my blends because their consistency adds an amazing creaminess to dishes—without adding cream.

Zucchini
In terms of calories, they’re a dieters dream. One large zucchini has just 55 calories. Blending them allows you to add tons of bulk to your meal while adding very few calories. They’re also high in fiber, manganese, vitamin C and potassium—and have been found to protect against diseases such as asthma, certain cancers, high blood pressure and heart disease. Some evidence even suggests they can jack up energy levels, help you think more clearly and promote a happier disposition.

For easy delicious recipes using these superfoods and more, check out my new book Sneaky Blends at thesneakychef.com 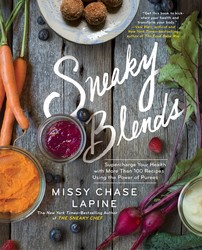 The New York Times bestselling author of The Sneaky Chef brings us the next trend in healthy eating with delicious and easy recipes whipped up with nutrient-dense purees to create leaner, cleaner yet ridiculously tasty meals. BLEND (blend) NOUN: a combination of different tastes made from superfoods, like blueberries, kale, and broccoli that are packed with disease fighting phytonutrients, fiber, and low in calories.