You have decided to go for it. You have talked to your doctor, cleared your cupboards, and had some tests done. As you will soon discover, the Blood Sugar Diet isn’t quite as tough as you may fear. Yes, you are going to be living on 800 calories a day for the next few weeks, but your body should adapt reasonably quickly.

Below are guidelines of what to expect at certain check points during the diet.

The First 2 Weeks
Once you’ve started, you will find that you begin to lose weight fast. Some of it will be fat, but initially you will also be passing a lot of urine. It is essential that you drink at least two to three quarts of calorie-free fluid a day or you will become constipated and get headaches. What you drink is up to you, as long as it doesn’t contain calories. It could be ordinary tap water.

If you are not thrilled with plain water, try disguising it by adding a squeeze of lemon or lime, or fresh mint and cucumber. I love seltzer with lots of ice and lemon, fruit-flavored tea, and the occasional coffee (with only a splash of milk). Some people like drinking hot water; oddly enough, there is evidence that heat alone can soothe hunger. Drink zero-calorie sodas if you must. But avoid fruit juice and smoothies.

The first two weeks are likely to be the toughest, as your body adapts to fewer calories, but this should in turn lead to some dramatic changes.

The 4-Week Review
The next key moment in your dieting odyssey will be the four-week review. By now you will be halfway through the diet, and hopefully things are going well. You will have lost a lot of weight, with much of it coming off your waist. Your blood sugars will be starting to stabilize at close to normal levels. Your sugar cravings will likely be much reduced. And ideally you should revisit your doctor to repeat blood tests and scans, if you’ve previously done them.

So, what changes can you realistically expect to see in your weight and blood sugars by the end of four weeks? Well, in Dr. Taylor’s original study, his volunteers, who started out at over 200 pounds, had lost an average of 22 pounds by the end of four weeks, most of it fat. They had also lost nearly 3 inches from their waist. Everyone reported feeling better, sleeping better, and being more active. Blood pressure and cholesterol levels also improved across the board.

At the End of 8 Weeks
By the end of the eight-week diet, if not before, you will see some big changes in your body shape and biochemistry. You should be sleeping better and feeling a real sense of achievement.

Perhaps you need to buy some new clothes to fit your new, slimmer self; maybe you stop and look in mirrors to admire the difference. So pull out that old photo. Take a new one. Post them on Facebook or Twitter.

By the end of eight weeks most people will have reached their targets, but some won’t. Perhaps you have more weight to lose; maybe your blood sugar or A1C results have not improved as much as you’d hoped for. If you feel you are heading in the right direction but are just not quite there yet, I suggest that rather than continue eating 800 calories every day, you move to the more flexible 5:2 approach

The Blood Sugar Way of Life
As I’m sure you know, many people who go on a diet end up gaining back some, if not most, of the weight they have so painfully lost. But this is not inevitable. The main thing you have to do is create a lifestyle you can stick to. If this involves avoiding all your favorite foods and running twenty miles a day, then it will fail. Be realistic.

Don’t despair. Lots of others have lost weight and kept it off. I lost 20 pounds three years ago, and occasionally I put a couple of pounds back on. But I find I can rapidly lose them again. I’m sure the main reason I’ve succeeded in keeping off the weight is because I’ve gone from gorging on sugary carbs to following a Mediterranean-style eating plan. That, along with increased activity and practicing mindfulness, has helped me keep diabetes at bay. The following are a few other things I’ve found useful and which are now a way of life for me. They are based on numerous conversations with diet experts.

• Try to sit down at the kitchen table for every meal. If you eat on the run or in front of the TV, you will eat badly and go on eating well beyond the point that you would normally feel full. We pay little attention to what we are eating when we are distracted.

• Try to eat slowly. It takes time for the food you eat to reach the parts of your small intestine where cells release a hormone, PYY, that tells your brain, I’m full. That’s why you will eat less if you eat slowly.

• Eat a lot of soup. It is filling, cheap, and practical.

• Don’t drink lots of alcohol. Alcohol contains plenty of calories and makes you disinhibited, so you are more likely to snack. I have switched to drinking red wine and try to drink only when I am eating. I also leave the bottle on the other side of the room because I know that I am less likely to fill my glass regularly if I have to get up.

• Keep tempting foods out of the house or out of sight. In a fascinating study Cornell University researchers found they could predict family’s weight by the foods left out and visible. If breakfast cereals, for example, were visible, then the owners were on average 21 pounds heavier than people in households where the cereals were tucked away.

• Know your weaknesses. Mine is toast. So I keep unsalted nuts by the toaster, so when I am tempted to snack on toast and jam, I eat nuts instead.

• Wear a belt. One of the surest ways of telling that you are putting on unhealthy fat is when your belt starts to feel tight again. 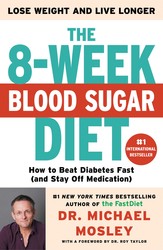 A groundbreaking guide to defeating diabetes without drugs—including a step-by-step diet plan, recipes, and the science behind why the program works—from #1 New York Times bestseller Dr. Michael Mosley. Mosley presents a groundbreaking, science-based, 8-week plan for diabetics who want to reverse their condition (and then stay off medication). He also offers a more flexible regime for people interested in the extensive health benefits to be gained from lowering their blood sugar levels and shedding dangerous fat.