Our ideas about portions have become so out of control that in many restaurants, a single entrée could easily feed four people. Here’s how to figure out for yourself how much you should eat, from Naturally Thin, a New York Times bestseller by Bethenny Frankel.

What’s a Portion?
I don’t like to tell people how much to eat. I’m never going to say to you, “Eat half a cup of broccoli and three ounces of chicken.” What if you don’t like broccoli? Or what if you want more broccoli? How much you eat depends on many things, not the least of which is how hungry you are at the moment. I think it’s absurd to tell people how much to eat.

However, I also know what it’s like to lose all sense of what a real portion is. To help you figure out for yourself how much you should eat, so you have a guide by which to measure whether you’d like a little less or a little more of something, here are some approximate reasonable sizes for some common food groups. Consider this a general guide. On some days, you will probably want a little more than this. On other days, half a portion might be more than enough. It all depends on what your food voice tells you.

Vegetables, Cooked: One portion of sautéed, steamed, boiled, or stir-fried vegetables would fill a small cereal bowl or salad plate. This is approximately ½ a cup to 1 cup. But to be perfectly honest, I’ve never measured my vegetables. They are vegetables! A big heap of them is a great investment.

Raw Fruit: One medium-sized piece of fruit, like an apple, pear, or peach, is a portion. Two plums or two apricots are a portion. For berries or chopped fruit like melons, aim to fill a small cereal bowl (about the size of half of a grapefruit) or Japanese rice bowl, or about 1 cup. But please don’t stress about measuring or weighing your fruit. I hate it when diet books say, “Eat a small apple.” Maybe I want a big apple. It’s an apple. It’s not going to make you fat.

Pasta and Rice: A small Japanese rice bowl is the right size for a portion of pasta or rice. It doesn’t sound like much, and sometimes you might want more, but remember that white pasta and white rice are likely to make you even hungrier, so they aren’t very good investments. Fill the bowl level, don’t heap it full.

Cereal: If it’s full of bran and made with whole grains and little or no sugar, fill a Japanese rice bowl or small cereal bowl about two-thirds.

Bread: One medium-sized slice, half a scooped bagel, half a scooped English muffin, or one small dinner roll is a portion. By “scooped,” I mean that I pull out some of the bread and throw it away. By the way, if the bread, bagel, or roll is gigantic, you know perfectly well that’s two or three portions. Can you split it with somebody?

Muffins, Cookies, and Pastries: The same thing applies to muffins, cookies, and pastries as to bread. If it’s medium-sized, it’s a portion. If it’s gigantic, it should not be for one person. Split it or save half for later.

Cheese: A piece of cheese the size of a business card. I’m a fan of soy cheese slices on sandwiches. Obviously, one slice is a portion.

Ice Cream: One scoop in a ramekin or custard cup is a portion. Nobody needs more than one small scoop of ice cream in a day.

Popcorn: Popcorn in a larger cereal or rice bowl is a portion. If you put butter on it, that also counts as a portion of fat. Don’t use very much. The popcorn shouldn’t be swimming.

Chips, Crackers, and Pretzels: A small ramekin of chips or crackers should be plenty, even if the bag says a portion is twelve or twenty or whatever. Just get a taste of the crunchiness and stop. But you don’t have to count.

Nuts: A small handful, unless you have large hands, and I don’t mean a handful so big that nuts are falling out between your fingers. I’m talking about approximately ¼ cup. But a small serving of nuts makes an excellent snack that will stick with you. If you use a ramekin, fill it only about halfway.

Nut Butter, Hummus, Guacamole: A thin spread. You don’t need to measure. Just don’t glop it on. Use your common sense and don’t lie to yourself.

Juice: If you like juice (I do), don’t be deterred by people who say you should never drink it. Obviously, whole fruit is better because of the fiber, which is filling and good for you, but if you really want juice, have some in a small juice glass or small wineglass. I like to mix mine with sparkling water. You don’t need to fill up a big water glass —  that’s too much sugar. It’s natural sugar, but it’s still sugar. The bottom line is, there is no forbidden food —  but I’ll hold back somewhere else if I want juice. Make your choice.

Wine or Beer: A small glass of wine, or half a bottle of beer, is a portion. Don’t kid yourself.

Liquor: One shot is a portion. Stick with clear liquor and use mixers that aren’t loaded with sugar, like seltzer or freshly squeezed fruit juice. 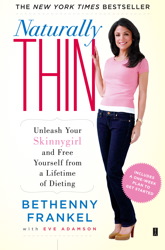 Naturally Thin shows how anyone can banish their Heavy Habits, embrace Thin Thoughts, and enjoy satisfying meals, snacks, and drinks without the guilt.