Many of us rely on that mid-afternoon cup of coffee to get us through the day. But can that extra cup be harmful? Matthew Walker, author of WHY WE SLEEP, shares how long it actually takes to the body to fully remove caffeine from your system.

You can, however, artificially mute the sleep signal of adenosine by using a chemical that makes you feel more alert and awake: caffeine. Caffeine is not a food supplement. Rather, caffeine is the most widely used (and abused) psychoactive stimulant in the world. It is the second most traded commodity on the planet, after oil. The consumption of caffeine represents one of the longest and largest unsupervised drug studies ever conducted on the human race, perhaps rivaled only by alcohol, and it continues to this day.

Caffeine works by successfully battling with adenosine for the privilege of latching on to adenosine welcome sites—or receptors—in the brain. Once caffeine occupies these receptors, however, it does not stimulate them like adenosine, making you sleepy. Rather, caffeine blocks and effectively inactivates the receptors, acting as a masking agent. It’s the equivalent of sticking your fingers in your ears to shut out a sound. By hijacking and occupying these receptors, caffeine blocks the sleepiness signal normally communicated to the brain by adenosine. The upshot: caffeine tricks you into feeling alert and awake, despite the high levels of adenosine that would otherwise seduce you into sleep.

Levels of circulating caffeine peak approximately thirty minutes after oral administration. What is problematic, though, is the persistence of caffeine in your system. In pharmacology, we use the term “half-life” when discussing a drug’s efficacy. This simply refers to the length of time it takes for the body to remove 50 percent of a drug’s concentration. Caffeine has an average half-life of five to seven hours. Let’s say that you have a cup of coffee after your evening dinner, around 7:30 p.m. This means that by 1:30 a.m., 50 percent of that caffeine may still be active and circulating throughout your brain tissue. In other words, by 1:30 a.m., you’re only halfway to completing the job of cleansing your brain of the caffeine you drank after dinner.

Here’s how to step up your morning brew game. 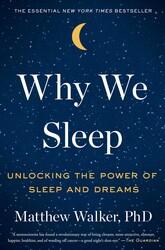 Why We Sleep
by Matthew Walker

A New York Times bestseller The first sleep book by a leading scientific expert—Professor Matthew Walker, Director of UC Berkeley’s Sleep and Neuroimaging Lab—reveals his groundbreaking exploration of sleep, explaining how we can harness its transformative power to change our lives for the better. Sleep is one of the most important but least understood aspects of our life, wellness, and longevity. Until very recently, science had no answer to the question of why we sleep, or what good it served, or why we suffer such devastating health consequences when we don't sleep.