As a kid at the dinner table, you may have heard that beets are good for you, but did you know that they can help reduce blood pressure? Michael T. Murray, author of THE MAGIC OF FOOD, outlines the various health benefits of drinking beet juice.

The Magic of Beets

More than sixty million Americans have high blood pressure, including more than half (54.3%) of all Americans 65 to 74 years old and almost three-quarters (71.8%) of all American blacks in the same age group. High blood pressure is a major risk factor for a heart attack or stroke. In fact, it is regarded as the most significant risk factor for a stroke.

Recently, there have been several studies showing that drinking fresh beet juice can lead to clinically meaningful reductions in blood pressure. Beet juice has been a popular folk remedy for centuries. The primary focus has been in disorders of the liver, but beet juice has recently gained recognition for its anticancer and heart health–promoting properties.

The pigment that gives beets their rich purple-crimson color—betacyanin—is a powerful cancer-fighting agent, while naturally occurring nitrates in the beets are thought to be responsible for their beneficial effects on the heart and vascular system. Studies with beet juice have shown that:

In one of the most detailed studies on beet juice, researchers at the Baker Heart and Diabetes Institute in Melbourne, Australia, had fifteen men and fifteen women drink either 17.6 ounces of a beet juice beverage containing 500 grams of beet and apple juice (72% beet, 28% apple) or a placebo. The participants’ blood pressure was measured at baseline and at least hourly for twenty-four hours following juice consumption using an ambulatory blood pressure monitor. The same procedure was repeated two weeks later, with those who drank the placebo in the first round drinking beet juice in the second and vice versa. Those who drank beet juice had a systolic blood pressure an average of four to five points lower after six hours. The significance of this is that drinking beet juice could cut the rate of strokes and heart attacks by about 10%. In terms of lives, that would mean about sixty thousand lives saved each year in the United States.

Muscles sore after a workout? Watermelon juice may help! 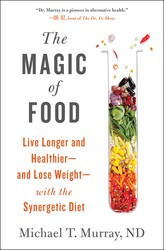 The Magic of Food
by Michael T. Murray

From “a pioneer in alternative health” (Dr. Oz), doctor of natural medicine, and the co-author of the Encyclopedia of Healing Foods and The Encyclopedia of Natural Medicine comes this accessible and comprehensive eating plan based on his extensive knowledge of food as medicine to promote optimum health.