Need the straight scoop on fish that’s safe to eat and what you should absolutely avoid? Get this comprehensive list of good (healthy and sustainable) and bad (high mercury levels, overharvested) seafood, from The Dirt Cure: Growing Healthy Kids with Food Straight from Soil.

Fish to Definitely Avoid (particularly for children, teens, men and women planning to conceive, or women who are pregnant/nursing):
• Tuna steaks or canned tuna: Tuna’s levels of mercury and PCBs are so high that the Environmental Defense Fund (EDF) recommends not eating this fish at all.

• Farmed salmon and tilapia: Most farmed salmon (everything labeled “Atlantic salmon” is farmed) are fed fishmeal, given antibiotics, and have levels of PCBs high enough to rate a health advisory from the EDF. Their squalid conditions also threaten wild salmon trying to swim to their ancestral spawning waters. Tilapia are dosed with hormones, antibiotics, and pesticides, and they are fed corn, soy, and even animal feces.

• Chilean sea bass: An endangered species, Chilean sea bass (aka Patagonian toothfish) has been fished to near depletion in its native Antarctic waters. Trawlers and longlines used to catch them have damaged the ocean floor and hooked albatross and other seabirds. The EDF has issued a consumption advisory for Chilean sea bass due to high mercury levels.

• Largemouth bass: Once a wild freshwater fish of choice in the United States, it’s been overfished and now measures dangerously high in mercury.

• Grouper: High mercury levels in these giant fish have caused the EDF to issue a consumption advisory. Groupers can live to be 40 years old but only reproduce over a short amount of time, making them vulnerable to overfishing.

• Orange roughy: Like grouper, this fish lives long but reproduces slowly, making it vulnerable to overfishing. Seafood Watch points out, “Orange roughy lives 100 years or more—so the fillet in your freezer might be from a fish older than your grandmother!” This also means it has high levels of mercury, which has led to health advisories. Children—and women thinking about getting pregnant or who are pregnant—should avoid.

• Atlantic cod: A general name for white-fleshed fish, cod became the “it” fish for fast-food and frozen dinners. However, huge corporate fishing operations with giant factory ships overwhelmed smaller fishing fleets, obliterating cod populations everywhere. Even after severe restrictions on cod fishing for more than 15 years, recovery has been limited. The average 20-pound cod of a couple generations ago has been replaced by 3-pound “scrod,” or pan-size cod. Pacific cod is in healthier shape, but that won’t last if the world demand for cod directs its focus there. Limit cod intake.

• Eel: This fish, which frequently winds up in sushi dishes, is highly contaminated with PCBs and mercury. The fisheries are also suffering from pollution and overharvesting. Consider squid instead.

• Atlantic halibut and other whitefish: Flounder, sole, and halibut caught off the Atlantic coast are often heavily contaminated and have been overfished since the 1800s. According to Food & Water Watch, populations of these fish are as low as 1 percent of what’s considered sustainable.

• Shark: When fewer sharks are around, their prey—cownose rays and jellyfish—increases and subsequently depletes scallops and other fish. As predatory fish, shark are extremely high in mercury.

Better Choices for Occasional Consumption
• Anchovies and herring: These small oily fish are nutrient-dense, high in omega-3 fatty acids and calcium, and are less contaminated because they eat fewer fish. There are enough of these fish for humans to eat them, if we are careful and support sustainable fishing practices. My kids love eating sardines as a snack on crackers. Once parents get over their own yuck factor, they often discover their kids love these tangy fish. They’re high in umami and add rich flavor to salads, sandwiches, and even veggies.

• Wild-caught Pacific salmon: Less toxic than farmed salmon. However, it would be impossible to meet the world’s demand for salmon with just wild-caught Alaskan salmon. Eat sparingly.

When buying any farmed fish, ask your fish supplier its buying policy to ensure it sources fish only from farms with high environmental and welfare standards. Best choices are fish farmed to organic standards or in closed systems, which reduce negative environmental impacts associated with open-net pen or pond systems.

HOW MUCH FISH DO YOU NEED?
The world’s current wild catch comes to about 170 billion pounds a year, which is about the weight of the entire population of China. This is six times more fish than we ate 50 years ago. The medical profession, however, currently recommends that each person eat two servings of fish per week, one oily fish and one whitefish, which would mean that we would actually need to harvest 60 billion pounds more fish than we are catching now. It’s just not possible. This is why I recommend significantly limiting fish intake until better, more sustainable methods are in place. Meanwhile, eat alternate sources of omega-3 fatty acids from pastured land animal products, augmented by fish oil or algae. Here are my recommendations:

1. Eat low-mercury fish only once a week or less. Children, teens, and pregnant women should avoid mercury-containing fish, but if total avoidance is impossible, eat it once a month at most. Choose either very small fish or those grown in minimally polluted areas like the Arctic, Antarctic, or Alaskan waters. Check websites that evaluate fish health and sustainability like Monterey Aquarium or Seafood Watch for current recommendations.

2. Find sustainably sourced fish oil. As much as I prefer that we derive all our nutrients directly from the food, cod liver or fish oil is a traditional food that provides our bodies with omega-3 fatty acids with less contamination. Fish oil provides EPA and DHA (docosahexaenoic acid), which are necessary for cognitive development, healthy vision, and more.

The best companies source sustainably caught fish and employ third-party testing by batch for heavy metals such as mercury as well as PCBs, antibiotics, and other toxins. Remember that some amount of bioavailable omega-3 fatty acids such as DHA and EPA can also be derived from eggs, meat, and dairy products if raised entirely on pasture. 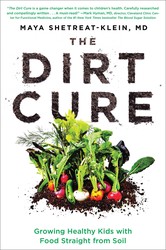 The Dirt Cure
by Maya Shetreat-Klein

In the tradition of Michael Pollan, Mark Hyman, and Andrew Weil, pioneering integrative pediatric neurologist Maya Shetreat-Klein, MD, reveals the shocking contents of children’s food, how it’s seriously harming their bodies and brains, and what we can do about it. And she presents the first nutritional plan for getting and keeping children healthy—a plan that any family can follow.