All progress starts with the unvarnished truth, but until you deal with the truth right in front of your nose, you cannot move forward. My mission is to shine a big light on the myths perpetuated about gluten (out of ignorance, an unwillingness to acknowledge error, or for mercenary reasons), reveal the truth based on the latest research and the experiences of thousands of people, and change the message. That message is based on a definition of gluten that hasn’t evolved over more than sixty years! Only when you understand and accept that truth will you be able to rid yourself of pain and restore your health. From No Grain, No Pain.

Let’s look at the eight myths and eight truths that underlie the No-Grain, No-Pain program.

Myth 1: Gluten is found only in wheat, barley, and rye—and sometimes oats.
Not true! Gluten is not a single protein found in a few grains; rather, it refers to a huge family of proteins. And only one protein, gliadin, found in wheat, barley, and rye, has been extensively studied. Each grain has one or more types of gluten proteins. A recent study identified four hundred new forms of gluten, forty of which were more damaging than the form of gluten for which doctors most commonly test.

Myth 2: If you are gluten-sensitive, you can safely eat whole grain substitutes such as corn and rice.
Not true! All grains contain some form of gluten. Research shows that corn (and corn oil) also produces numerous intestinal and health problems for the gluten sensitive. Remember, corn is a grain, not a vegetable—and it is in thousands of “Frankenfoods,” aka junk-food products. For a list of hidden corn–based ingredients, visit glutenfreesociety.org /hidden-corn-based-ingredients.

Myth 4: If you don’t have Celiac disease, you can eat all the gluten you want.
Not true! Celiac disease is just the tip of the gluten-sensitivity iceberg and only one of many autoimmune and other conditions it can cause.

Myth 5: Gluten sensitivity is the same thing as celiac disease.
Not true! Most people (and most health professionals) think gluten affects just the gut. They don’t realize that gluten sensitivity is in fact indicated by a host of other symptoms, from headaches to muscle pain, arthritis, and hypothyroidism. Celiac disease is only one manifestation of gluten sensitivity, which is a genetic state that can express itself through multiple painful disorders when triggered by gluten.

Myth 6: Lab testing for gluten sensitivity is accurate.
Not true! There is no lab test for all of the different forms of gluten. When doctors test blood for gluten reactions, the test measures only one type of gluten found in wheat, barley, and rye, creating a potential false sense of security. Even the most progressive lab in the world only looks at a dozen distinct gluten proteins.

Myth 8:Gluten-free processed foods are safe.
Not true! These foods are usually full of grains (and soy) to which gluten-sensitive people are likely to react. Don’t eat these foods if you value your health.

How Much Gluten is in Different Grains? 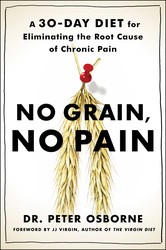 No Grain, No Pain
by Peter Osborne

In the tradition of Wheat Belly and Grain Brain; No Grain, No Pain demonstrates the proven link between a gluten-heavy diet and chronic pain and discomfort—and offers a groundbreaking, 30-day, grain-free diet plan to help you heal yourself from the inside out.