We all know the foods we should minimize to be healthy. But now I’d like to tell you about the stuff you should be eating: complex carbohydrates and lean protein—food that’s high in nutritional value, with minerals and vitamins. Basically fruit and vegetables, plus stuff you can snack on throughout the day, like popcorn, or a handful of nuts, which should stave off those cravings for chips and cake.

1. SWEET POTATO
My personal trainer, Jermayne, first turned me on to sweet potato. He said, “Look, man, try it with lunch rather than chips and sandwiches. Put some sweet potato in a salad with chicken. Make some wedges out of it; it’s awesome!” I admit it, though, the first time I had it, I thought, This tastes a little bit strange. My sister used to have it with her Sunday dinner and I thought it was weird.

I persevered, and I’m so glad I did. That first week I had a sweet potato for lunch every day and eventually I ended up loving them. Now it’s one of my go-to foods and a vital part of my diet because it’s a complex carb. That means it breaks down slowly (unlike a refined carb, like normal potatoes or white pasta), giving me energy for longer periods of time. Sweet potato is also extremely high in vitamin B6, which I’ve heard may help to prevent heart disease, as well as helping with PMS symptoms, depression, and skin blemishes. It’s seriously good stuff.

It’s not just found in sweet potato, though. Other foods that are high in vitamin B6 include sunflower seeds (a great snack), fish like tuna and salmon, turkey, and pistachios (though try and keep those nuts plain). If you’re unconvinced, give some sweet potato wedges a try. Cook them up in coconut oil and add a little flavor with some cajun spice or smoked paprika. Whack them in the oven with the skin still on for forty minutes—it’s super-healthy and so tasty.

2. BLUEBERRIES
These were a mystery to me back in the day. I might have had them in a muffin, or as part of a dessert every now and then, but I’d never snacked on blueberries before. Now I’m always eating them between meals because they’re one of the fruits with the lowest amounts of sugar. They’re also packed full of antioxidants—chemicals that seemingly block those nasty “free radicals,” which can make you more at risk of cancer.

Whenever I’m craving something sweet, I tend to turn to blueberries for help. Those urges usually come around nine or ten o’clock at night, a couple of hours after I’ve eaten dinner. If I eat blueberries I don’t have to worry about them keeping me awake because they’re low in sugar. They’ll kill my hunger without giving me a crazy sugar rush afterward. I also put them in my cereal and smoothies, and snack on them during the day.

3. QUINOA
My friends always tease me about the amount of quinoa I eat, but it’s honestly changed my diet big-time. The simple facts of it are this: quinoa is a bit like rice, but the amount of protein per grain is incredibly high, which is what makes it so healthy. If you’re a vegetarian or vegan, it’s also a great way of getting some protein into your diet without eating meat.

These days I’ll have quinoa with curries; I’ll put it in salads instead of rice. It only takes ten or fifteen minutes to boil and you can chop up tomatoes or onions and throw them into the pot to add a little extra flavor. A vegetable or chicken stock cube is a nice addition, too.

4. ALMOND BUTTER
My mom tried to introduce me to almond butter for six years without any real luck. I was never a peanut butter lover so it seemed a big step for me, but once I got into it I absolutely loved it. Now I’ll put it on my rye toast in the mornings, and I snack on it and drop it into my smoothies.

Whenever I travel anywhere I’ll always pack a jar of the stuff so I can spread it on some crackers when I’m staying in a hotel. It’s a healthy snack that can get me through the day, especially if I’m too busy to cook anything. It’s so good. If you don’t believe me, check the label: most brands are a hundred percent crushed almonds and all natural, as well as being high in good fats and protein.

Almond milk is also a great alternative to traditional cows’ milk. As humans, our bodies aren’t actually made to consume dairy products. A surprising number of people can’t digest dairy properly and it leaves them bloated, gassy, and tired. I switched to almond milk not so long ago and liked it. Now I use it with cereals, coffee, and smoothies, and it’s a lot better for you as long as you stick with the unsweetened versions. Sweetened almond milk often contains a lot of sugar.

5. GREENS
I guess I was lucky, because even when I was young Mom would make dinners that came loaded with vegetables. My snacking habits were bad, but most of my evening meals were served up with tons of vegetables. There was stuff like spinach, kale, greens, and broccoli, plus loads of peas. All the stuff you’re supposed to eat to maintain a healthy diet. I lapped it up.

It helped that I was a fan of the cartoon Popeye when I was a kid. If you haven’t seen it, Popeye was a sailor who used to crack open a tin of spinach every time he was in trouble. The greens used to give him super-strength, and I would always think, What’s so good about that stuff? It was only when I researched the benefits of spinach recently that I discovered just how high it is in protein for a vegetable. So it’s true what they say, then: if you want to grow up big and strong, eat your greens. Seriously, they’re important.

6. FISH
Fish is a great way to get good proteins into your diet, and tuna, salmon, and cod are all very high in protein. Oily fish also contains a lot of omega-3, which is important because it may help lower the risk of heart disease, depression, dementia, and arthritis.

Still unconvinced? Well, here’s a little biology for you: a lot of shellfish contain iron, which is stored in your liver, spleen, and bone marrow and helps develop red blood cells. These carry oxygen around your body. Without them your cells would become starved of oxygen, your brain and muscles wouldn’t function properly, and your immune system might become a bit sketchy. And that’s just the start of the problems, so get some iron in your diet! (Oh, and lean meats are also great for this, like chicken, turkey, and lean beef.)

It’s taken me a while to get there, though. I used to hate that unmistakable fishy taste until about a year ago when I started to try things like sea bass. That eventually got me on to things like salmon (but only very recently) and these days I can cook a really good tuna steak—that’s my fave. But I’m so glad fish is a part of my diet now.

7. RYE BREAD
If you want a healthier alternative to a thick-cut, white loaf, try rye bread. My mom has always been really into this. She’d eat it with almond butter and I couldn’t understand the fuss at first. But I’ve recently got into it and it’s so nice! It can be even healthier than many whole-wheat breads. If I’m in a rush in the morning, I’ll toast some and add a little almond butter. Delicious.

Make sure to look at the ingredients when you buy rye bread, though. Some brands still contain a lot of refined sugars, so always check for whole rye flour and other natural ingredients. Another thing to look out for on food labels is the phrase “Low GI.” This refers to the glycemic index—a measurement of a carbohydrate’s impact on a person’s blood glucose levels. If that sounds too scientific, just remember that, in general, low GI is good, high GI is bad.

8. SPARKLING WATER
Cutting out diet drinks was a huge step for me because it killed a lot of the cravings I had for other unhealthy foods. In the end I got over my addiction by adding freshly squeezed limes or lemon to sparkling water. OK, I know it sounds boring, but once you’re used to it, it’s great. And so much better than tooth rot.

9. DARK CHOCOLATE
Milk chocolate is so addictive. I used to open a package with the idea of eating a chunk or two, and before I knew it, I’d have wolfed down the whole block. Dark chocolate is tasty—so tasty once you get used to it—but it’s bitter, especially if you’re eating a type that’s around seventy percent cocoa content (which I’d recommend), so it’s much harder to eat more than a couple of squares in one sitting.

The transition is hard at first, but once you’re there I guarantee you it’s even harder to go back. I’ve eaten milk chocolate recently and thought, Wow, that’s too sweet! Dark chocolate, like blueberries, is also high in antioxidants, which are so vital in battling those unpleasant free radicals, and it’s great for killing a craving for sweets.

10. POPCORN
A healthier alternative to chips and amazing when sprinkled with rock salt (not drowned in toffee), air-popped popcorn only contains 31 calories per cup. It’s a whole grain, which is good for your diet, plus it contains complex carbs. It’s also naturally low in calories and fat. So get going! 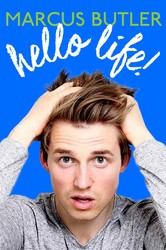 Learn how to be an almost adult in this indispensable guide from British YouTube star Marcus Butler.For a twenty-three-year-old, Marcus Butler knows a lot about life—and not just from his own experiences but from the millions of followers on YouTube who chat with him on his irreverent channel, known for its mix of hilarious sketches, light-hearted banter, and deeply empathetic take on serious issues.