My standing joke is that I’m sometimes the Rodney Dangerfield of publishers. Half the books I publish are what we call licensed tie-ins, which means that they are based on rights we license to make books with kids’ favorite television, movie, or toy characters. There’s a huge bias against these kinds of books, even within the children’s publishing world. (Maybe especially within the children’s publishing world.) Many a colleague will turn up a nose at a book about a Disney character over a more classic, original book. I can’t count the number of times someone has said to me, “Oh, we don’t read those kinds of books.” Then they ask if I’ve watched the latest episode of the Real Housewives.

I am not a big fan of reality TV. I have never seen an episode of any of the Real Housewives. So maybe I’m off base here, but I don’t understand how you can be obsessed with the housewives but won’t buy a Paw Patrol book for your child.

I’m an avid baker. I bake more when I get stressed out (I have perhaps the only husband who comes home to find the counters covered with cakes and cookies who says “Oh, no.”). Without analyzing my stress levels, let’s just say there is almost always something sweet in the house. And my hope is that my kids learn that it’s there, but we don’t have it all the time (and, no, not for breakfast no matter how much you smile adorably at me and tell me I’m the best mom ever). It’s nothing forbidden, but it does have a time and place. That to me is the definition of moderation.

My kids of course read classic books. We have a lovely library filled with award-winning books endorsed by people who judge those things and, even more so, pass their mother’s pretty high standards. I appreciate that they are well written and well made. We also have books about Elmo, Paw Patrol, Batman, and Star Wars. I appreciate that those books are well written and well made. And I appreciate the fact that my children love them and eagerly want to read about their favorite imaginary (to me, not them) friends.

I am not endorsing books that are shoddily made, and unfortunately that’s sometimes an unfair assumption about licensed character books. And by shoddily made I mean thrown together, badly written and with ill-fitting illustrations.  Or books that just have a character thrown on them for the sake of branding which, as a publisher as much as a parent, drives me to Joker levels of crazy. Those books are out there, yes. But I’d argue that for every bad licensed character book, there’s also a pretty badly made non-licensed book.

Then you also get into the licenses themselves. Is a PBS-licensed character, such as Daniel Tiger, better than a Disney character like Mickey Mouse? That seems to me more a matter of taste, like saying watching The Real Housewives of New Jersey is totally not the same as watching Top Chef. But maybe the point is this: As much as some people want to put all licensed books in some kind of book ghetto, if they are great stories then what, really, is the issue?

It depends on what you are after.

If you want to be an arbiter of taste for your child then you’ll heavily patrol and control what they read. I presume this bleeds into other areas of their lives as well. And my hats are off to parents who lead no-screens, no-sugar, all-wooden-toy households. I swore I would be like that, to an extent. I said a lot of things before I actually had kids.

I want my children to love reading and love wonderful books but more than that I want them to delight in books. If that means their eyes light up when they see a book about Batman then I am going to be thrilled they are reading a book about Batman. In my mind, as a parent and as a publisher, that’s the end of the argument. My mantra? Read what you love, especially when you are young. There will be plenty of time you have to read things you don’t love, like really boring end-of-year reports or books about how to get your kids to sleep (which, by the way are the best kinds of books to put parents to sleep).

Many parents stress out about a reluctant reader who doesn’t want to read at all, but still fight letting the child choose his or her own kinds of books or comics or graphic novels. Is it better to have them reject book after book or would you rather they read a Teenage Mutant Ninja Turtle book and ask for the next one in the series? Who or what is it hurting: your taste? If my child hated reading I’d be glad he was reading anything, including the back of a cereal box. If that’s what is going to interest him and invite him into the world of books and–who knows?–open a whole world of reading for him, then by all means cowabunga ahead.

I can tell you as a publisher that at major houses there’s not some sort of “second rate” system for books with licensed characters. They go through the same editorial process, they are subject to a group of eagle-eyed copy editors, and are given the same thoughtful design review as any other book a house publishes. The license owner is treated as the author; we have meaningful conversations about what the character would or would not do in a story. We talk about how best to replicate in a book exactly what the child loves about a character’s world. These are, I can assure you, detailed conversations with much (lord, so, so much) back and forth to get it right.

While we’re on the subject, licensed character books are often priced lower than traditional storybooks. Publishers do realize that buying hardcover picture books for $17.99, which is about the average price, is a stretch for most people. You can usually buy a paperback storybook featuring a favorite licensed character for $3.99. That’s quite a difference. I can expand my child’s library, offering them four more stories for the price of one hardcover picture book. That means a lot to many parents. It means a tremendous amount to me as a publisher to publish books more parents can afford.

While licensed character books are sold in traditional bookstores, they are most often found in mass market retailers, like Target, Walmart, or Buy Buy Baby (which I think happens to have a damn good book selection for the youngest set). True, you aren’t going to Costco as a book destination (in my house we apparently go to find the heaviest container of laundry detergent to see if I can actually lift it). But is buying a book at these places a problem? I’m happy to find books everywhere I go.

I do not rely on Stop-n-Shop for my book buying needs (not that there’s anything wrong with that). I go to libraries and bookstores and do a lot of research to find the right books I think will engage my children. I would not be happy if all my child read were books about TV characters (mostly because I’d worry that if the only source of his inspiration was television he is probably watching way too much of it).  In our house we eat cake.  We also eat vegetables.

Read what you love.  Let your kids read what they love too.  Especially now.

Here are our favorite character stories we’re reading as of this week: 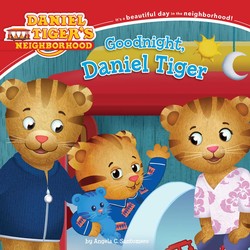 Wind down from a busy day and get ready for bed with Daniel Tiger in this 8x8 storybook. It’s almost time for Daniel Tiger to say goodnight, but there’s still so much to do! There’s play time and then bath time…and don’t forget tooth-brushing time! Finally it’s time to get cozy under the covers for story time and a special goodnight song. Daniel Tiger’s Neighborhood fans will love winding down their busy day with their favorite friend before snuggling into their own beds to say goodnight!

The Monster at the End of this Book
by Jon Stone

By all accounts, this book is a favorite among toddlers and adults alike. Generations will recall their first time reading along as lovable, furry old Grover begs the reader not to turn the page . . . for a monster is at the end of the book! But, of course, the monster is none other than Grover himself. A classic, not to be missed.

Lego Star Wars: Save the Galaxy!
by Ace Landers

Our heroes must evade Stormtroopers, outwit Darth Vader, and steal plans to the Death Star. With a little luck — and a lot of LEGOs — they might even manage to save the galaxy! With more than 40 deluxe flaps to lift, readers can explore the Death Star, a Jawa Sandcrawler, the Tantive IV, the Cantina, and the Millennium Falcon!