One of the things that I find annoying when having any discussion about parenthood or raising kids is leaving out fathers. This blog is titled BookMom because I write it and because I’m a mom (honestly, “BookParent” just didn’t have the same ring), but I’d like to think that the audience includes mothers and fathers, partners, grandparents, and anyone helping to raise a reader (which essentially includes the entire universe).

There is indeed a BookDad in our house. BookDad is also a writer and editor. The worst fight BookMom and BookDad ever had was over BookMom’s insistence on the use of an Oxford series comma in our wedding program. Two editors editing each other. Shiver. (Many years later we now joke about it. Sort of.) So in honor of having a male voice included, here’s BookDad in his own unedited words. Feel free to pay special attention to his use of commas.

We’ve spoken before about how dads are portrayed in many books. In the stereotypes, moms are loving and lovey and never exasperated and dads are always clueless and fixing stuff. As someone who doesn’t know a screwdriver from a… OK, let’s stay on point here. How do you feel about that?

This annoys me a bit in ads and TV sitcoms. There was a study a few years back which found that only around 20 percent of dads believed they were depicted realistically in media; I couldn’t believe the figure was that high. It hasn’t changed much: Ad dads are paunchy and blank-faced. The kids outsmart them on a regular basis (in our house, it only happens 40 or 50 percent of the time). Most seem to be dealing with some kind of neurological condition, one that keeps them from executing even the most basic of tasks (“Do not allow the pets to engage in acts of emotional congress”).

That still holds for a majority of ads and sitcoms—but happily, I don’t see it as much in the books we read. Take Daniel Tiger’s Dad—dude’s got a high-powered gig at the clock factory, yet always finds time to pretend he’s a crazy beast and deliver advice so calming that it shouldn’t be dispensed without a prescription. We should all live our lives with such grace and dignity.

Are moms depicted in kids’ books as warmer and more attentive? Probably. But dads don’t come across as power-tool-obsessed oafs who’d drain the college fund for an elusive Bud Light. That works.

You’re an avid reader. What do you think fostered that, if anything?

Curiosity, mostly. I’ve never revealed this publicly, but what the hey, we’re all friends here. Like most teenagers who came of age in the classic-rock era, I went through a pronounced phase as a Doors fan. Do I listen to their music now that I’m (mumbles into crook of arm) years old? Heavens, no.

Nonetheless, everything about the Doors—the words, the music, the sideburns—once activated something in my imagination that couldn’t be sated by records alone (“records” were these things that used to contain music, in an era before songs were beamed from the sky into our computer Internet phones). Thus when my mother dropped a copy of No One Here Gets Out Alive, a biography of Jim Morrison, into my hands, I had an epiphany of sorts: Ah, information! About things that I find interesting! That did it for me. My parents read to me plenty when I was a little dude, but the Jim Morrison book was what made me a reader.

Do you have concerns about raising readers? What do we do or what don’t we do that you think helps or hinders that (Please note: This is my blog. Nothing is ever going to be my fault)?

I have deep concerns about our children growing up in a household overflowing with unnecessary commas. Beyond that, though, I think we’re doing pretty well on this front. If there’s a rare night when we don’t read to them—if we get home late, if they extend their bath time by staging an impromptu reenactment of the sinking of the Spanish Armada, etc.—they notice it and it disappoints them. There’s already an awareness and appreciation of the joys of reading. Go, us.

There are some statistics that say that boys are less prone to be enthusiastic readers. As a father of sons, do you worry about this? Do you see yourself as a role model for them?

Yeah, this is a worry. Some nights, by the time we’ve eaten and cleaned up and shoehorned in a few sentences of actual spouse-to-spouse communication, I’m dangerously close to losing my ability to process words. So the TV goes on and my brain goes guhhhhhh. That’s setting the wrong example, especially since outside of what I read for work the kids don’t witness me reading much beyond the weekend newspaper. The stack of unread-but-soon-to-be-read-honest-they-will books on the bedside table, alas, doesn’t change that perception. Can we build some “Daddy sits on his butt and reads at a leisurely pace under a cooling beach umbrella” time into our late-summer vacation? I think that’d be really good for the kids. Really.

I’ve alluded to this in another post. Do you want to admit to hiding books from the kids you hate to read? I found that 365-page one under our bed.

No comment, other than that if I truly want a book lost, it ain’t gonna be found, by you or by the nation’s most skilled forensic investigators.

Book Dad’s Favorite Books to Read to our Kids:

#642,788. That 342-page book of NHL lists/records, which lacks the narrative flow our children so enjoy. 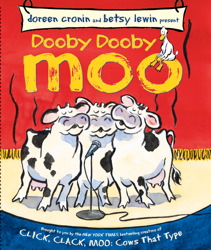 Doreen Cronin and Betsy Lewin's bestselling Dooby Dooby Moo is available for the first time as an individual board book!

The Pigeon Finds a Hot Dog
by Mo Willems

When Pigeon finds a delicious hot dog, he can hardly wait to shove the entire thing in his beak. But . . . then a very sly and hungry duckling enters the scene and wants a bite. Who will be the more clever bird? In this hilarious follow-up to the acclaimed Don't Let the Pigeon Drive the Bus! Mo Willems has created another avian adventure that encourages children to share even their most prized processed foods. 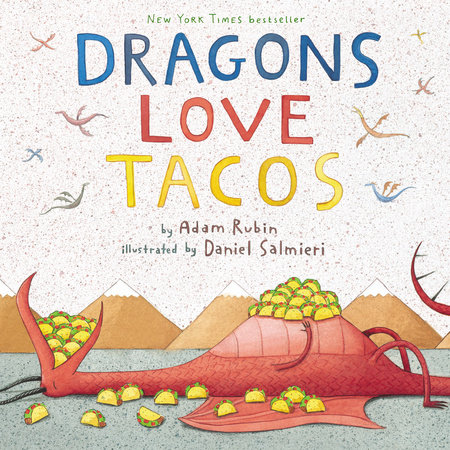 A New York Times bestselling phenomenon, this deliciously funny read-aloud from the creators of Robo-Sauce and Secret Pizza Party will make you laugh until spicy salsa comes out of your nose.

Dragons love tacos. They love chicken tacos, beef tacos, great big tacos, and teeny tiny tacos. So if you want to lure a bunch of dragons to your party, you should definitely serve tacos. Buckets and buckets of tacos. Unfortunately, where there are tacos, there is also salsa. And if a dragon accidentally eats spicy salsa . . . oh, boy. You’re in red-hot trouble.

The award-winning team of Adam Rubin and Daniel Salmieri has created an unforgettable tale of new friends and the perfect snack.