One of my husband’s favorite stories about what I do came early in our relationship. I came home tired and cranky after a rough day and he asked what happened. I threw up my hands and after a litany of Things Gone Wrong within the Hour added, “and the art came in and the bunny is just not cute enough for the cover.” He paused then burst into laughter. I paused then burst into mad. “The bunny isn’t cute enough,” he repeated. It was then that I understood how totally absurd that sounded out of context and how somewhat absurd the world of children’s books I live in is. I live in a world where bunnies drive cars, dinosaurs go to school, and cats are doctors. Sometimes bears and fish have play dates.

Before I dive into the rabbit hole, let me be clear that there are many, many books with realistic fiction for kids, from picture books to novels. And then there are the books that feature tigers on telephones and elephants who take bubble baths. I’ve had many conversations with art directors and book designers when I catch myself saying things like “The cow looks weird sitting at the table like that. Can we tell the artist to move her closer to the duck sitting across from her?” And then I have to realize that we are talking about a cow and a duck eating pancakes. With forks. At a table. Before they go to school. Where of course their teacher is a hippopotamus.

I’ve heard from many a disgruntled parent that they don’t like this world. A fox and a chicken as best friends? “But that would never happen in the real world!” they sputter. Probably not. But in the real world they also probably wouldn’t be playing baseball together. And it might not be that funny.  Because the real world these days? Yeah, not too funny.

When I worked at a company that produces a popular children’s television show we were very careful in how we portrayed safe practices for kids. No showing the characters near a hot stove, running with scissors, even eating junk food. When they rode bikes, they wore helmets, as children should (as should their parents). But these characters also didn’t wear shoes, so one could argue that riding a bike shoeless in a city isn’t exactly exemplary role modeling.

In children’s books most editors are mindful that, intentional or not, characters are models for their reading audience. And most editors try hard to get it right. But there comes a time when you realize that showing a shark putting on sunscreen before he goes to the beach gets…a little out of control. (Yes, I know. And yes, in real life our family is slathered in sunscreen.)

There are Big Issues I have to discuss with my children, from Bad Touch to loss to Internet safety to understanding that no means no. And I’ll look to books to help with some of those discussions. But when I just want a story, a fun story, to share and enjoy? Well I couldn’t care less that the alligator and the snail are having a tea party.

I realize that the realists in the world take issue with this. But in my book, quite literally, there’s a time and place for the reality we deal with every day. There are days I walk in the door with “That Look: when my husband simply asks “Bunnies not cute enough?” and I shake my head no.

When it comes to tomatoes playing in a band or a toad that pushes a stuck pick-up truck out of the mud? Kindly suspend belief. And enjoy… the real world and those very un-cute bunnies will catch up soon enough.

Here are some of my favorite silly books featuring things that I am certain would never happen in real life: 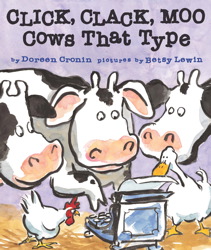 Doreen Cronin and Betsy Lewin's Caldecott Honor-winning book is available as an individual board book for the first time! 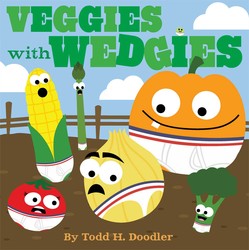 What could be funnier than a vegetable wearing underwear? A veggie with a wedgie, of course! When Farmer John puts out his underwear to dry, he has no idea that it will draw the curiosity of all the vegetables on the farm. They think underwear looks cool. And fun. And they desperately want to wear it. But how? On their heads? Their arms? They will have to wiggle around to get a perfect fit. This hilarious story is perfect for children transitioning from diapers to underwear—and of course for those big kids who already sport it. Because, after all, underwear IS funny. And a wedgie is REALLY funny. Especially on a veggie.

The Dumb Bunnies
by Dav Pilkey