As a parent there are a lot of things that make me want to scream on a daily basis. Sliding on toys with wheels that are left in front of hot ovens. Packing what I think are creative lunches only to have them come home uneaten. Finding crayons in pockets of pants…in the dryer. So by the time I hold it all in and we hit bedtime, it’s natural that I want to scream about reading that same book for the one millionth time. Especially when it’s the most annoying, cloying, longest book you have in your house.

I’ve heard a lot of friends complain about this as well. “With so many books to choose from, how come she only wants that ONE book again and again?” Some have even confided that they think there’s something wrong with a child who only wants that one book. There’s not. It’s normal.

I’ve learned a lot from the television production companies I’ve worked for and with in terms of programming for kids. They know that kids will—happily!—watch the same show about 9,000 times and they take that into consideration when they are doing their schedules. So if you think it’s odd that the same episode seems to be airing every day for weeks, it’s actually deliberate (sorry, but you have to hear that song again). Repetition is good for kids. That’s how they can really take in, understand, and examine a concept.

Kids also crave routine, and repetition comes with that package—which is where some of desire for repeats in bedtime reading comes in. In our house at least the repetition extends to songs, shows, breakfasts, lunches, dinners, and anything they find funny: “Do it AGAIN, Mama!” they will scream, especially when I go sailing across the kitchen floor while tripping over a Matchbox car with a pan of hot meatballs in my hands. Our kids learned sign language before they could speak. The sign most used? The one that means “more.” Sometimes our youngest, when tired, will revert to the sign instead of speaking. I now flinch when I see it. (I do get the irony when More, More, More Said the Baby became an instant favorite in our house).

The light at the end of the tunnel of a book rut is that kids’ preferences seem to shift with little notice. When a child receives a new toy, for instance, it is “the” It toy for a few days or weeks (or in some cases, mere hours). In my experience it is usually the toy that makes the most God-awful noise. All other toys are ignored. Lord help any other child who touches that toy. And then, as fast as it started, they have moved on to another It toy. The last It toy is later found in some dark recess under the sofa.

Books can go in the same direction. Kids are attracted to books for various reasons, from brightly colored pictures, the style of the art, or the subject of a book. For younger kids and babies, a lot of it is the repetition or rhythm of the book and the way it sounds when you read it out loud to them. They will gladly listen to it again and again and again. And sometimes again for good measure. Then, one night: pouf. On to the next great thing. The saving grace with The Book That Will Not Go Away is that it rarely becomes The Book We Read Forever.

I have been tempted, as any parent, to simply say no when presented with a book that I know from beginning to end because it has been burned in my brain. “This one!” a tiny finger will point. “Oh, we just read that three times last night. Let’s try another one?” And the face crumples, I grumble, and crack open the cover again. Maybe I should have just tried the more direct “no.”

I did meet someone who told me that she read her kids the same books every night as part of their bedtime routine. “Like on purpose?” I asked. Apparently so. I don’t think I’d do it deliberately. At some point reading the same books seems like it would become more of a routine than something we enjoy. We definitely have books we read 14 times a night for 40 nights in a row. But I always choose a few new ones as well, or at least some that have only been read 38 times. I make sure we have plenty of offerings in our book baskets so there are choices.

When you are in the middle of “Oh, I cannot possibly read this book again,” try to think ahead to a time where that book will be the one you find in some dark recess under the book shelf. Seeing the cover will make you fondly remember a time when the child in front of you was smaller, cuddlier, and thought you were smarter.

“Ohhhh, look,” you will say, pulling it out. “Remember when we used to read this every night? Every night!” You might a little teary. “Should we read it again tonight?”

These are books I can read on auto pilot and still love:

THE all-time classic picture book, from generation to generation, sold somewhere in the world every 30 seconds! 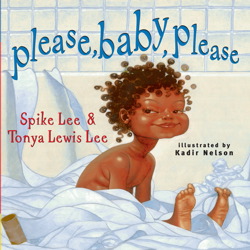 Go back to bed, baby, please, baby, please. Not on your HEAD, baby baby baby, please!... From moments fussy to fond, Academy Award-nominated filmmaker Spike Lee and his wife, producer Tonya Lewis Lee, present a behind-the-scenes look at the chills, spills, and unequivocal thrills of bringing up baby! Vivid illustrations from celebrated artist Kadir Nelson evoke toddlerhood from sandbox to high chair to crib, and families everywhere will delight in sharing these exuberant moments again and again. 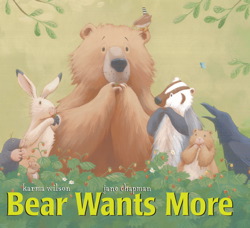 When springtime comes, in his warm winter den a bear wakes up very hungry and thin! Bear comes out of hibernation and he's VERY hungry. He eats everything in sight--but he still wants more! Bear's friends finally help him satisfy his HUGE hunger by throwing him a surprise birthday party. Bear's adventures (like being too fat to fit through the doorway) will entertain and delight young readers.

The Babies on the Bus
by Karen Katz

Their grownups love then. So will you.