Yes, really. You could open a book and take deepbreathandjustreaduntilyoufinish. You might read it as you would read it to yourself. But when you read a book to a child you have an audience. An audience who usually isn’t afraid to take the book and throw it if they don’t like it (or maybe that’s just my kid). Here’s what’s worked for me for making reading together, well, better together.

Get comfy. I have read books while twisted into uncomfortable chairs in a doctor’s waiting room with a wailing child on my lap. I wouldn’t say that’s optimal. At home I look for snuggle time. With an infant I like to make sure that the book is placed so the baby can try to focus on it (to the best of their ability depending on age) and that I can balance the child while easily turning pages and without whacking them in the head with the book (this takes practice, trust me).

I am always conscious that even if I’m exhausted and thinking that if the kids go to bed in exactly 9 and a half minutes I can still squeeze in a run on the treadmill and a few chores around the house before I collapse, the kids will pick up on my attitude. (And in the case of my kids then try to extend bedtime even longer. But maybe that’s just my ruthless bunch…) When I’m relaxed and focused my kids are, too (Usually. Sometimes.).

Remember someone else is reading with you. Read aloud at a pace so a child has time to process the story. Don’t speed on through; a child who loses the plot will quickly lose interest in the story.

Look to your child to set the pace. Watch his or her eyes; are they scanning the page? Is your child taken with a particular image? If so, stop and wait and give them a chance to take it all in. I find it really annoying to ask “Ready?” as I’m about to turn a page, but that does work for some people. Pausing between pages is OK; enjoy that rare moment of silence. I mean, seriously, a moment of silence. Savor it!

Interject, and here it isn’t rude to point. “Hey, do you see that the bunny is saying good night to a red balloon? Remember that we saw the red balloons at the birthday party today? That party was fun, wasn’t it?” Sometimes my kids want me to shut up and read the story. Sometimes, especially if they’ve had a grumpy day, it’s a nice way of getting them to engage and talk. And it’s a good way of relating things in the story to their own day. I also like that you are introducing the concept that there’s more going on in a story; yes, it’s a picture of a bedroom, but what’s the deal with the balloon? Where did it come from? Did Bunny go to a birthday party earlier in the day and also pitch a fit and refuse to leave without the one balloon that was about 16 feet up on the ceiling? Oh, that was just you! It’s teaching kids to read the pictures and make up their own stories, too.

Name it. This goes along with pointing. Reading is one of the best ways to build a child’s vocabulary, and pointing out objects in the pictures and naming them is a good way to do it. You can name mundane things like “Oh, there’s the bunny’s bed” to new things like “That’s a fireplace. That’s what we use in the winter to keep warm. Please never, ever throw anything in it like your brother did that one time.”

Improvise. If, say, a rhyme at the end of a story rhymes with one of my children’s names, I’ll insert that. Sometimes if we’re reading a book about a kid who did something not so great–No, David comes to mind–I’ll insert something they do that warrants a “No!” from me. Or maybe I’ll say something like “Good night, moon. And good night to the really smelly fish that Mama made for dinner tonight and actually thought I would eat.”

Give up. Sometimes. When I was younger (i.e. before I had children) I would never give up on a book, no matter how much it disinterested me or how much I hated it. Then I became a parent and learned to treasure the time I had to read just one book a year. While sometimes you do need to get into a book or get going a bit for a child to explore a story, sometimes it’s just not working. My opinion would be to abandon ship and try it again another day.  Ever make something new for dinner and they eat it with reckless abandon?  Then you make it the next week and they turn up their nose?  Kids are fickle.

Give the audience what they want. One of my children routinely flings books off my lap if he isn’t feeling them (I blame this on his pre-verbal stage; otherwise he would certainly say “I don’t care for that one, Mama.”). Sometimes my kids are eager for new stories. Sometimes they want the ones we’ve read 900 times. I get it. I go with it.

Form a book club for two. I like talking about stories after we’ve read them, even if it’s just “I love that book.” Sometimes I get a look back. Sometimes I’ll get “Yeah, I love that too because…” and then we’re having a terrific conversation. If I chose a book for a reason–say I heard that there was a fight between friends and I’m reaching for Rosie and Michael, one of my faves–I’ll say “Oh, it’s so great that they are friends. They probably fight sometimes, too. But that’s OK as long as you say you’re sorry and talk it through, right?” I won’t say this has always opened up marvelous dialogue, but I have to believe I’m giving them something comforting to think about.

After I’ve read that last line, we’ve closed the cover, and they are under the covers, I wonder what stories they’ll be dreaming of that night or what stories they have to tell. I think of the last line of Goodnight Moon: “Goodnight noises everywhere.” And then I realize the noises are asleep. The house is quiet. And now it’s time to go for that run… after I sit here and enjoy the sound of that silence a little more.

These are a few great read-alouds my toddler is loving right now: 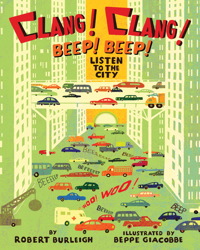 Dawn until dusk, the city is alive with sounds, from the TING-ALING- A-LING of an alarm clock in the morning to the BEEEEEP! BEEEEP! of traffic in the afternoon to the quiet SHHHHHHHHHHHHHH of evening. Noted illustrator Beppe Giacobbe’s bright palette and pleasing cityscapes bring the excitement of the city to life in a story that begs to be read aloud again and again. 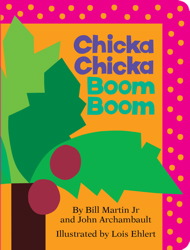 The complete edition of the bestselling children’s favorite, Chicka Chicka Boom Boom, is now available as a Classic Board Book! A told B and B told C,“I’ll meet you at the top of the coconut tree.” When all the letters of the alphabet race one another up the coconut tree, will there be enough room?Of course there is always enough room for this rollicking alphabet chant that has been a children’s favorite for more than twenty years! Bill Martin Jr and John Archambault’s rhythmic text keeps the beat with Caldecott Honor illustrator Lois Ehlert’s bold, cheerful art. This winning combination has created a series of enduring Chicka Chicka favorites, and now, for the first time ever, the complete edition of the original Chicka Chicka Boom Boom story is available as a Classic Board Book. With sturdy pages and rounded corners, this portable edition of an irresistible alphabet romp will delight a new generation of young readers. 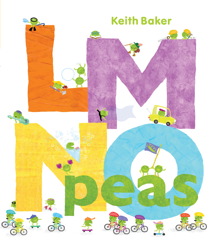 Get ready to roll through the alphabet with a jaunty cast of busy little peas. Featuring a range of zippy characters from Acrobat Peas to Zoologist Peas, this delightful picture book highlights a variety of interests, hobbies, and careers—each one themed to a letter of the alphabet—and gives a wonderful sense of the colorful world we live in. Children will have so much fun poring over the detailed scenes that they won’t even realize they’re learning the alphabet along the way!

Sheep in a Jeep
by Nancy Shaw

In Sheep in a Jeep, the hapless flock goes for a drive in the country... With these muttonheads, a normal outing is sure to turn into a joyous lark. Rhyming text and disarming illustrations make this board book a shear delight!