Good intentions. Well, we know how that road goes. You turn on a movie before you realize are they are, wait, are they… oh god. You start to read a book without realizing it has something scary in it. We’ve all been there.  I blame lack of sleep over lack of awareness. Some kids are perfectly fine sitting through Star Wars and some of those same kids get freaked out watching Paddington Bear (who knew that blowing up a galaxy is apparently less frightening than being shipped off to a new country by yourself with only a note to “look after this bear?”).

Maybe you’ve had a book as a kid that still scares the dickens out of you. I do. Suffice it to say I was convinced Hitler was alive and well in New Jersey (no need to get into the details). My mother, a teacher, lived by the mantra “There’s a book for that” and promptly bought me a book to help: Starring Sally J. Freedman as Herself, by Judy Blume. It is about a girl who believes Hitler is alive and well. I’m sure it was meant to be reassuring (spoiler alert: Hitler was indeed dead), but it only convinced me that I wasn’t crazy to have this thought. That book haunted me. It had to be turned around, upside down, hidden in the back of my bookshelf. The cover still gives me nightmares. As an adult I can see that it was a pretty rational, even insightful choice; a story meant to appeal as a character who might feel the same angst I did. As an adult I see that while the Holocaust definitely plays into it, there’s a lot more about the story of a girl trying to find her way. I totally missed all that by getting hung up on the “Hitler might be in Miami Beach” plot.

To Be Filed Under: I Will Never Make the Mistakes My Mother Made
Maurice Sendak’s classic Where the Wild Things Are has been written about extensively, both from the perspective that it really understands children and the perspective that it scares the hell out of them. Under the “Well, I’m sitting right here next to him so nothing could scare him that much and it IS a classic” premise, I started reading the book. It scared the crap out of him. I mean, in retrospect, we’re talking about wild things coming out at night. Even if they are friendly, they still lurk. And I was reading this to a kid who was/is/probably forever will be afraid to go to sleep without a parent in the room. Publishers sometimes make really dumb book choices. Ooopsies.

I will say that I am not a proponent of keeping children in a bubble. And I think books are a wonderful way for them to explore things that in real life may be frightening. It’s a “safe” way for them to try on situations, go on adventures, take part in an alternate reality and still wake up safely in their own beds. In fact there are professionals who argue that one of the best ways for kids to confront fears like this is head on through a story.

And let’s not lose sight of the fact that books are inherently vehicles for escape. When adults read we love to get in the minds of criminals and sociopaths, see into the hearts of the villains, explore situations we never would in the real world. It fires up imaginations, gives us insight, allows us to try on a few costumes. That’s why we love books and that’s why we want, as parents, to instill a love of reading.

But, again, the running theme of this blog comes to play: Kids are different. While most Judy Blume books were a way for me to live through friendships gone bad, first crushes, disappointments and fears about adolescence, Starring Sally J. Freedman was a book that made me want to throw up. Some kids will be intrigued about pushing boundaries in a story. Some kids will slam that cover shut faster than you can say “Chapter One.” There’s nothing wrong with trying different books, and you might have to so you can see where your child lands in the “This is cool” vs. “I never want to see this book again” ends of the spectrum.

You know your kids. Even if you are halfway through a book and you see “that look” or the eyes go wide or they start to scooch closer to you while gripping your arm, stop. Ask what’s scaring them. Try to talk through it. Read it together, even if, maybe especially if, it’s an older child. If it’s not working then shut the book. Depending on the trauma level you can either leave it in their room and say “maybe we’ll read it again another time” or take it with you: “I’ll keep this in another room/far away/hidden on another planet.” I would advise against the “it’s just a book” line. Because it’s not: it’s a world. And even if it’s a made up world to them it still kind of exists. Even if the worst happens and you totally traumatize your child with a book that will scare her for the next three decades, don’t worry: sometimes those kids grow up to be editors.

Books that inadvertently scared (hopefully not scarred) my children include We’re Going On A Bear Hunt in which a family has to run from a threatening bear (yeah that one should have been obvious) and Whose Mouse Are You? a wonderful classic in which mouse’s parents get eaten by other animals (don’t worry, they are all ok in the end). 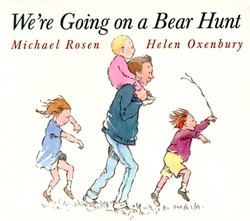 We’re Going on a Bear Hunt
by Michael Rosen

Now the very youngest readers can join in the fun with this Classic Board Book™ edition of We're Going on a Bear Hunt. Full of delightful comedy and high drama, this tale of a brave family's joyous romp through sweeping landscapes is sure to win new fans. Where the Wild Things Are
by Maurice Sendak

Where the Wild Things Are is fifty years old! Let the wild rumpus with Max and all the wild things continue as this classic comes to life as never before with new reproductions of Maurice Sendak's artwork. Astonishing state-of-the-art technology faithfully captures the color and detail of the original illustrations. Sendak himself enthusiastically endorsed this impressive new interpretation of his art before his death in May 2012. Winner of the 1964 Caldecott Medal for the Most Distinguished Picture Book of the Year, Where the Wild Things Are became an iconic book that has inspired a movie, an opera, and the imagination of generations. It continues to be one of the best loved books of all time the world over, by the one and only Maurice Sendak. 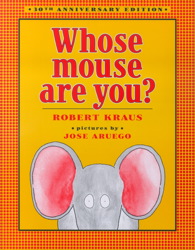 Whose Mouse Are You?
by Robert Kraus

In a series of delightfully imaginary achievements, "nobody's mouse" transforms himself into the beloved hero of his mother, father, sister, and brand-new baby brother. In their very first collaboration, now celebrating its 30th anniversary, Robert Kraus and Jose Aruego give charm and validity to one of childhood's more difficult experiences. Tender and catchy, Robert Kraus's rhyming text, combined with Jose Aruego's large, vibrantly clever illustrations, makes for a storytime classic. This happy picture book is brusting with wit, tenderness, and joyful ingenuity.